Rugby Stats: How being second best can help a side lift Pro 12 title 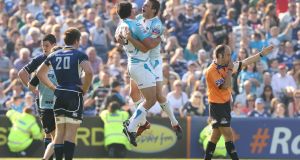 Ospreys’ Dan Biggar celebrates with team-mate Scott Baldwin after the 31-30 victory over Leinster in the 2012 PRO12 final at the RDS. Photograph: Billy Stickland/Inpho

As the Guinness Pro12 meanders towards the final weekend of the league stage of the tournament, it is timely to reflect on the statistics of the knock-out stages dating back to the introduction of the playoffs, two semi-finals and a final, in the 2009-2010 season.

Prior to that whichever team finished top of the league were considered the champions. The decision to change the format was taken in April, 2008, aiming to generate additional revenue and a higher profile climax to the season in keeping with those of the English Premiership and the French Top 14 Championship.

The last team to win under the old format was Munster who, to mix sporting metaphors, pretty much led from pillar to post, losing just four matches, and claimed the title honours on the final weekend in April without playing – the Ospreys couldn’t pick up a bonus point required in beating the Dragons – as they prepared for a Heineken Cup semi-final against Leinster at Croke Park.

Prior to this Saturday’s matches, a number of things are known in relation to the semi-finals. Leinster will host one at the RDS and Munster the other at Thomond Park. What team will finish first and second in the table is still up for dispute – Leinster will top the table if they beat Ulster – while the Scarlets and the Ospreys, who meet at the weekend, are still contesting third and fourth place.

So what do the statistics reveal in the seven seasons of the Pro12 playoffs?

Well fundamentally it is better to finish second in the league table than it is first because in four of the campaigns during that time sequence, the club that finished runners-up in the league format went on to claim the title, on each occasion triumphing over the table toppers.

No club which has finished third or fourth in the league has managed to negotiate a passage to the final in the seven seasons, something of which the Scarlets and Ospreys will be aware, as they aim to buck the trend.

In 2010 second seeds, the Ospreys surprised Leinster 17-12 in the then Celtic League final at the RDS, Irish international Tommy Bowe, one of the Welsh club’s two try scorers that day as the Irish province could muster nothing more than four penalties from the boot of outhalf Johnny Sexton.

The Ospreys enjoyed something of an Indian sign over Leinster in finals, repeating the dose, two seasons later, again at the RDS, when prevailing 31-30.

The Irish province were seeking on that occasion to become the first team to win a Pro12 league and Heineken Cup double, but succumbed to a 78th minute try from Shane Williams and a touchline conversion by Dan Biggar.

Leinster completed an unwanted hat-trick last season when they again lost the final, being beaten by Connacht at Murrayfield, having topped the league after 22 rounds of matches. The only other team to finish first in the league and fail to be crowned Pro12 champions is Ulster.

In the 2012-2013 season, number one seeds, Ulster beat the Scarlets in the semi-final while Leinster accounted for the Glasgow Warriors. The northern province should have enjoyed home advantage in the final but forfeited that right because Ravenhill was being transformed into its current incarnation, the Kingspan Stadium. The game was instead played at the RDS with Leinster emerging victorious.

So what of the end to this season’s Pro12?

Well for example if Leinster did face the Ospreys in a final, the good news for the Irish province is that it is pencilled in for the Aviva Stadium rather than the RDS where the Irish province has twice previously been beaten by the Welsh club in the decider; indeed Leinster have won just two of four finals at the RDS, while appearing in five in total as they lost to Connacht at Murrayfield.

Munster have won the only final they have been in (2011) during those seven seasons, and on that occasion were the number one seeds, so they’d like to sneak past Leinster in the table on Saturday to replicate that particular set of parameters.

And if you’re an Ospreys or a Scarlets fan, your team is going to have to do something never previously accomplished by a third or fourth-placed team in the playoffs.