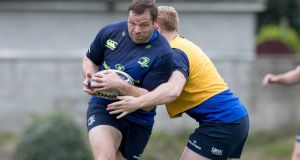 Mike Ross: announced his retirement this week but will feature in the Leinster team to host Glasgow Warriors. Photograph: Morgan Treacy/Inpho

There are a number of milestones that lend a greater poignancy than otherwise would have been the case.

Leinster have already qualified for a home semi-final, albeit that they want to re-establish momentum for a Guinness Pro12 title surge after last Sunday’s Champions Cup disappointment.

Ross Molony captains Leinster for the first time in a competitive fixture, while in a late change announced on Friday, Jack Conan who was originally named to start at number eight and win his 50th cap, has had to pull out with a tightness in his calf.

He is replaced by Dan Leavy, with Peadar Timmins coming onto the bench.

Scrumhalf Nick McCarthy enjoys a first start and centre Tom Daly is in the run-on team at the RDS for the first time.

Mike Ross announced his retirement during the week so each match in which he is involved from now until the end of the season carries a greater resonance. Apart from a “unique sense of humour and dry wit” – his words – he was asked how he’d like to be remembered by his team-mates.

“I probably came a very different path to most lads to the professional game. It can show people you don’t have to do the schools and Academy, traditional route. There are other options out there. You can see that with players coming through the non-traditional pathways. If it gives them an example of how they can do it, I would be quite happy with that.”

His legacy will be a great deal more. A renowned scrum technician and cornerstone of the Leinster and Ireland pack, his prowess allowed the teams on which he played the chance to attack off first phase, while his knowledge and generosity in devoting time to educating his potential successors is an invaluable gratuity.

Ross was asked to name the player he enjoyed most playing alongside and after a brief hesitation he nominated Paul O’Connell, for his quality as a player and a person and then a more practical consideration that O’Connell “was so tough and pushed like a freight train, so it was always good to have him behind you”.

Somewhat at the other end of the spectrum is the 22-year-old secondrow Molony who will combine the duties of captaincy and lineout caller. Leinster coach Leo Cullen explained why the former St Michael’s College and Ireland Under-20 captain has been promoted to the senior leadership role.

“He is a young leader but in his role in the team, in terms of the direction he gives on the field, it’s probably a natural progression for him. He’s done it with a number of teams.

“We’ve been impressed with the way he has led the team in other windows. He might not necessarily have been captain but in other games where the captain has gone off, he has taken over. We have lot of confidence in terms of what he delivers.”

One area in which the team will be looking for a much-improved performance is the lineout, a platform that collapsed last weekend against Clermont. Glasgow Warriors have reflected that shortcoming in the team that coach Gregor Townsend has chosen, by including Scotland international secondrow, Tim Swinson, as a blindside flanker.

Leinster retain only two starters from Lyon, wing Fergus McFadden and backrow Leavy; although five of the eight replacements were involved in the last match-day squad. Cullen elaborated on the selection process.

“It’s a number of things. A few guys were unlucky to miss out last Sunday, guys that have been pushing really hard, so they get a crack. It’s their chance to shine. There’s a couple of others guys, Nick McCarthy and Tom Daly in particular, two players that have worked really hard and just been unlucky with a number of selections during the season.

“Glasgow are a formidable team with a lot of experience in their squad, as well as a well-coached team. It hasn’t necessarily gone for them this season at various stages but they’ve shown glimpses in big games; if you think away game against Leicester, away against Racing.

“It should be a fast, open game between two teams who like to play. There’s plenty at stake for the guys in our team.”

Leinster travel to Belfast for the final match in the league stage before the playoffs, so opportunities are now scarce. Glasgow are in Dublin with a relatively robust team and an even stronger bench. It’s a decent yardstick by which to measure, individually and collectively.