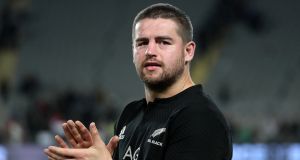 All Blacks hooker Dane Coles is facing a battle to be match-fit for the British and Irish Lions tour of New Zealand after his Super Rugby coach said he was now suffering from concussion symptoms.

The Wellington Hurricanes captain has not played since he limped off with a knee injury in his side’s 41-15 victory over the Otago Highlanders on March 18th.

He subsequently suffered a calf injury at training that has kept him out, but Boyd then told reporters on Wednesday that he was now suffering from headaches during exercise.

“Colesy’s situation is complicated by the fact that... subsequent to his knee injury, he not only developed a calf strain but also some headaches,” Boyd said in discussing his side for their clash with South Africa’s Stormers on Friday.

“He is now under a return to play protocol for concussion.”

Boyd said the Hurricanes had no idea when Coles suffered the injury that has resulted in the concussion symptoms.

“We genuinely don’t know where he got those symptoms from,” he added.

“We’ve had a look at the Highlanders game, which was the last game he played. He had no symptoms post that, so I’m not sure. The source of that is completely unknown to us.”

Coles began to suffer from the headaches as he increased his workload in recovering from the calf injury, Boyd said.

“At the end of the day, he has started to return to train and developed some headaches,” Boyd said.

“It’s not normal, but if you look at it in context, because of his knee injury, the first part of his rehab was no training at all so, if there were symptoms post the game that would come out under exercise, they were not apparent.”

Coles’ is not the only All Blacks regular causing some concern as to whether they would be fit enough to face the Lions, who start their 10-match tour on June 3rd.

Fullback Ben Smith is also suffering an ankle injury that kept him out of the Otago Highlanders matches in South Africa for the next two weeks, while outside backs Israel Dagg (knee) and Nehe Milner-Skudder (foot) are still recovering.

Derby day delight as Man United stop City in their tracks 18:53
Jürgen Klopp says Liverpool aren’t lacking hunger to win 18:32
Benzema strikes late to earn Real Madrid a point at Atlético 17:59
Here is your handy guide to sport on television this week 17:01
Sam Bennett on top again as he takes Paris-Nice first stage 16:55
Crossword Get access to over 6,000 interactive crosswords