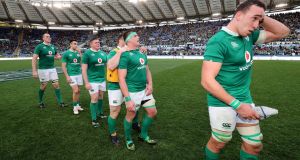 The Zurich players’ player of the year award is between Robbie Henshaw, Tadhg Furlong, CJ Stander and Conor Murray. The winner will be announced at the Rugby Players Ireland annual dinner on May 10th in Dublin.

Ireland captain Paula Fitzpatrick is up against props Leah Lyons and Lindsay Peat for the women’s XVs player of the year.

One from Joey Carbery, Garry Ringrose and Darren Sweetnam will be named the Nevin Spence young player of the year. Sweetnam, 23, is a year older than Ringrose, who has also been nominated for European player of the year, along with Stander, but the Munster winger has made an impressive transition from Cork hurler to professional rugby player.

Carbery’s rise, since helping Clontarf to the AIL title last season, has been nothing short of meteoric.

Try of the season is between Craig Gilroy (versus Italy in the Six Nations) and the Henshaw or Murray touch downs in victory over New Zealand.

ZURICH CONTRIBUTION TO IRISH SOCIETY
The award will be presented at the ceremony on Wednesday 10th May 2016.

DRUIDS GLEN HOTEL & GOLF RESORT MOMENT OF THE YEAR 2017
Voted by the public on Twitter @druidsglen (#DruidsMoment17) the Rugby Moment of the Year will be unveiled at the Awards ceremony on Wednesday 10th May 2017.