Statistics show a balance between Munster and Toulouse 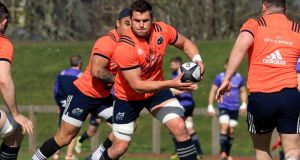 Munster's CJ Stander is a long way ahead of anyone else in the Champions Cup in terms of carries made. Photo: Donall Farmer/Inpho

The focal point of this week’s column is the attacking philosophies and patterns of the respective teams in the Champions Cup quarter-finals this weekend involving the two Irish provinces, Munster and Leinster.

Specifically regarding how they stack up over four statistical categories, in comparison with their direct opponents.

Munster host four-time European champions Toulouse in a repeat of their 2014 match at the same stage of the tournament in which the home side prevailed at Thomond Park.

The French side have staggered into the playoffs, fortunate to squeeze past Connacht on points difference, winning one game less to boot.

Toulouse’s form in 2017 on the road – one draw in their last five away matches – is poor, yet despite these shortcomings they have stayed true to the traditional values of the club, summed up in the philosophy “jeu de mains, jeu de Toulousains”: a game played with the hands.

This is perhaps best reflected in the “clean breaks” category where the four listed players headed by Yoann Huget are all Toulouse backs. Indeed there isn’t a Munster player listed in the top 11 in this category according to the official Opta statistics because none have made four or more clean breaks.

Two Munster players make it into the top 11 in “defenders beaten”, Simon Zebo (nine) and Keith Earls (seven) with the rest of the head-to-head between the teams populated by players from the French side. Toulouse, as the graphic below illustrates, dominate the “offloads”.

Munster wing Darren Sweetnam (four) is the only player to make it into the top 15 in this category. On average the French side (23.7) made four times as many offloads as Munster (5.8) during the pool stages, two and a half times as many clean breaks and for an average of 480 metres per game as against 284 for the Irish province.

So if the French side dominates a direct comparison in terms of their hosts on Saturday in clean breaks, defenders beaten and offloads, Munster’s initial attacking philosophy is a little narrower and more direct, highlighted by the personnel who show up in ‘carries,’ while also possessing a more nuanced kicking game.

Number eight CJ Stander (100) is a country mile ahead of anyone else in the tournament, never mind this specific match comparison, while the presence of prop Dave Kilcoyne and hooker Niall Scannell in the top four illustrates the point that Munster soften up their opponents before shifting the point of attack.

Bordeaux-Begles were very effective in stymieing Toulouse’s offloading game in a French Top 14 game last weekend by second one tackler in to chop the ball carrier and a second to target the ball. Something Munster may look to mimic.

There were a couple of interesting notes to emerge from a similar head-to-head comparison between Leinster and Wasps, who meet at the Aviva Stadium on Saturday. The first is the manner in which the Irish province employs Garry Ringrose as a primary attacking fulcrum.

Ringrose (77) has carried more ball than any other Leinster or, for that matter, Wasps player, with Jamie Heaslip (73) – he will miss the game through injury – second in the listing with Robbie Henshaw (71) also boasting a prodigious work-rate in this capacity.

At face value Ringrose and Henshaw would discharge similar roles for Ireland in carrying terms but there is a subtle difference in that the Ringrose (20) has found more space to roam in the outside channels in the Champions Cup, areas Leinster like to work him into, an assertion supported by his presence at the top of the “defenders beaten” chart.

What’s also evident in his game when playing for Leinster is the number of offloads (11) he manages, more than double that of Heaslip (5) and Wasps and England number eight, Nathan Hughes (5).

The English side sit proudly atop of the Aviva Premiership, thumped Leinster twice in Europe last season, and have a reputation for possessing a lethal cutting edge behind the scrum.

Only Nemani Nadolo (9.6) has a higher average of metres made per carry in the tournament than Bassett (8.8), the Edinburgh-born, English-raised wing, who has attracted the interest of incoming Scotland coach Gregor Townsend. He is also his team’s leading try scorer in Europe this season.

There is very little to choose between the teams across a variety of attacking categories merely underlining how potent both teams can be.

It’s fair to say neither team will die wondering.