Ireland U20 star Larmour ruled out of World Championship 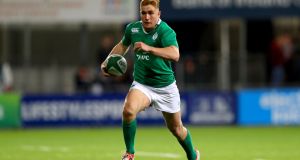 The Ireland Under-20 team is facing something of an injury crisis ahead of the Junior World Championship in Georgia next month as several high-profile players look certain to miss the tournament.

Number eight Caelan Doris, another standout and coincidentally injured in the same club match, is rated extremely doubtful, as is Connacht’s Cillian Gallagher, who still hasn’t recovered fully from the shoulder issue that curtailed his involvement in the Six Nations.

The backline resources have been further decimated with the news that another hugely influential player, Tommy O’Brien, suffered a serious hamstring injury and won’t travel, while neither will the ridiculously unfortunate Munster outhalf Bill Johnston, once again laid low by injury.

Ulster fullback Rob Lyttle (shoulder) may also miss out while provincial team-mate and outhalf Johnny McPhillips (groin) is also struggling to be fit. Captain Jack Kelly is expected to travel despite the shoulder problem that reduced his playing time in the Six Nations.

Nigel Carolan’s elevation to backs coach at Connacht means that Peter Malone takes over as interim head coach of the Ireland 20s, with Kieran Campbell coming in to coach the backline.

Ireland play Italy, Scotland and New Zealand – the latter whom they beat en route to last year’s World Championship final – in the pool stage of the Championship.