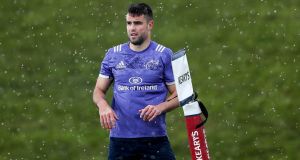 Lions coach Warren Gatland is confident that Conor Murray will get a game for Munster before the departure to New Zealand. Photograph: Donall Farmer/Inpho

Murray has not played since that game in Cardiff on March 10th but Gatland is hopeful that he will play for Munster before the end of the season.

“Conor Murray, the prognosis with him looks pretty positive in terms of hopefully getting back and getting a game for Munster as well, and that will be good for him over the next few weeks if he can get a game,” said Gatland.

The New Zealander also gave updates on two of his Welsh stars named in the 41-man squad for the tour to New Zealand.

Lions skipper Sam Warburton is sidelined because of a knee injury, but he could play for Cardiff Blues ahead of the Lions’ departure for Auckland on May 29th, while secondrow Alun Wyn Jones is out with a shoulder injury.

“I spoke to Sam yesterday, and he feels that he could play now, and so he has made some really good progress and is really happy with how he has responded to treatment over the last few weeks. I expect him to play before he goes to New Zealand,” said Gatland.

“[Jones] is making good progress as well. [Lions assistant coach] Steve Borthwick went down and saw him last week, and he’s confident that he is going to be okay as well.”

Prominent owners terminate contract as Gordon Elliott’s yard sponsor 09:45
Gianluigi Buffon at 43: why messing up is key and what makes him happy 09:39
Manchester City go 15 points clear; Gordon D’Arcy on what we can learn from Italy win 07:36
Gordon D’Arcy: Ireland merely picked through the carcass of Italian rugby 06:00
Brian O'Connor: Elliott revelations leave racing’s good name in state of disrepute 06:00
Crossword Get access to over 6,000 interactive crosswords