England poised to have the Lion’s share in touring squad 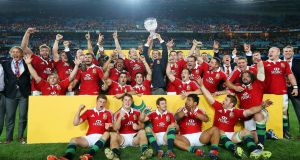 Given the recent conclusion of the Six Nations Championship in a Lions touring year, it is an obvious exercise to establish what correlation, if any, there is between finishing positions in the tournament and the number of subsequent representatives of each country that travel in the red jersey.

There have been a plethora of Lions teams and/or touring parties selected over the last few days in the media and elsewhere and that speculation will mount in the days leading up to the official announcement by head coach Warren Gatland of his squad to travel to New Zealand on April 19th.

The breakdown of the proportional representation from the players of Ireland, England, Scotland and Wales in the graphic requires a clarification or two.

The numbers are based on the original Lions squads chosen, so for example taking the 2009 tour, Ireland had 14 representatives initially but lost three before the tour departed, due to injuries to Tomás O’Leary and Jerry Flannery and Alan Quinlan’s suspension.

Similarly in 2013, the current England captain Dylan Hartley was selected to travel by Gatland but subsequently omitted after picking up a suspension for verbally abusing referee Wayne Barnes. Ireland’s Rory Best travelled in his stead.

The figures below reflect the original squads for the purposes of comparison between Five/Six Nations finishing positions and representation from the four home unions. In 1997 Peter Clohessy withdrew with a back injury prior to travelling and was replaced by Paul Wallace.

England have had the biggest representation on three tours but it’s ironic that their worst finishing position in the Five/Six Nations – fourth in 2005 – coincided with the biggest number of tourists (20) under their World Cup-winning coach Clive Woodward.

Declan Kidney’s Grand Slam- and Six Nations-winning Ireland did provide the lion’s share (14) from a single country in 2009 from the original selection but by the time they’d left they’d lost three players – O’Leary, Flannery and Quinlan – making Wales (13) in effect the largest contributors.

The Welsh have also enjoyed the single biggest representation on one occasion and that came four years ago in 2013 when, on winning the Six Nations – their only defeat was to Ireland in the opening match – Gatland chose 15 players from the Principality.

There is a pronounced correlation between the final standings in the Five/Six Nations and the size of a country’s representation for the ensuing Lions tour. An exception was when Wales won a Grand Slam in 2005 yet were only third (10 players) in terms of the numbers that travelled to New Zealand.

Ireland finished fifth in the 2013 Six Nations yet by the time the touring party got to Australia they had the second largest contingent as Best had replaced Hartley at that point flipping the numbers with Irish players (10) and their English counterparts (9), in contrast to those in the graphic.

In 1997 and 2001, England were top dogs among the home unions in terms of where they finished in the table and therefore enjoyed the biggest numbers on the tour, while the same was the case for Ireland 2009 and Wales in 2013.

So on that basis England would have a legitimate claim to having the largest number of players travelling in what is likely to be a 37-player squad. In the official original squads for the five tours in the professional era England have contributed 75, Wales (56), Ireland (44) and Scotland (16) from a total of 191.