Gordon D’Arcy: Clermont loss can be springboard for Leinster 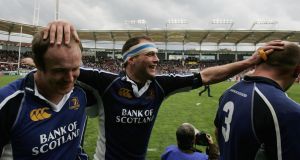 Felipe Contepomi celebrates with team mates Denis Hickie (left) and Will Green after their victory in Toulouse in the Heineken Cup quarter-final in 2006. ‘There were a lot of similarities between that game and Leinster’s loss to Clermont.’ Photograph: David Rogers/Getty Images 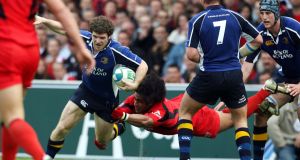 Toulouse’s Finau Maka makes a flying tackle to hold on to Gordon D’Arcy during Leinster’s victory in the Heineken Cup quarter-final in 2006. Photograph: Billy Stickland/Inpho 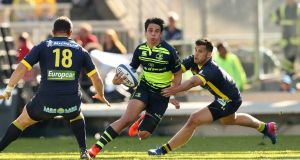 Joey Carbery was one of the Leinster players who showed a necessary willingness to fail in order to succeed during their clash with Clermont Auvergne. Photograph: Billy Stickland/Inpho

History does not always repeat itself but it has a lovely habit of rhyming. Watching Leinster backs tear out of their 22 in Lyon I was instantly reminded of Denis Hickie’s try against Toulouse in 2006.

This time around it ended with a Clermont scrum as David Strettle disrupted Joey Carbery’s pass to put Isa Nacewa away. But it was an almost identical scenario when we consider the intent, the appetite to attack wherever the opportunity arises.

It makes me wonder if there is such a thing as rugby DNA? And can this be used as a chart for future progress?

I think so. There are so many similarities. Both attacks were counter-punches. Both came from turnovers as huge French forwards sensed the opportunity to land a killer blow.

It is important to note the first distributor is not overly concerned with fixing a defender but focused on setting the process in motion. For Felipe Contepomi see Johnny Sexton.

The intent? Leinster of old had constructed a 26-21 lead over Toulouse and we knew we needed to keep attacking. Leinster in the present day were 15-0 down after 24 minutes of serious Clermont punishment in what was, for many of them, their first Champions Cup semi-final.

What was so impressive was how they showed a necessary willingness to fail in order to succeed. A team that was already beaten, mentally, or with the 2006 version just trying to hang on, would have kicked the ball. Not a single player contemplated that option.

The way Clermont defended was similar to Toulouse. The evolution of the game is also in evidence; back then we passed before contact. This was a reflection of how we played rugby in 2006 rather than our skill set.

Had Carbery tried to pass before or after contact it would have been a complete mess. He made the correct decision but Strettle’s hand deflected the ball to ground. If that is a finger rather than a hand, the ball glides into Isa’s welcoming mitts and he coasts over for a certain seven points.

The distribution of Sexton and Robbie Henshaw is interesting as neither fix a man so much as make them hold stride to mark space. Each time this happens that defender has to accelerate to make up the ground he has just lost, making him vulnerable to being beaten on the inside shoulder.

Ask Ringrose how he opened Clermont’s defence and I doubt he will be able to tell you. It’s just part of his DNA. He was reading all the information as play came towards him, noting each time the defender had to stop and go, so when the ball reaches him all his actions are instinctive. He makes an extremely hard read look very easy. It looks like he has done this a thousand times. Maybe he has but certainly not at this pace, in this environment and against this calibre of opponent.

Clermont got lucky with Strettle’s hand, just like luck fell the other way in Toulouse as the try line seemed three inches wider than normal (or just an amazing finisher knowing he could make it).

Next time maybe Carbery will do something different. A subtle change, like arching his back, or he’ll just have enough confidence to make it work. That the ball went to ground will probably prove enough to motivate him to keep trying until it comes off.

In 2006, just like 2017, Leinster still had a long way to go on our journey to becoming European champions. Michael Cheika only arrived that season. Munster still had our number. It was another three years before we scaled the mountain top.

But that sunny afternoon in Toulouse showed everyone what was possible. There is no reason why Lyons cannot prove a similar watershed moment.

Jason Cowman – currently Ireland’s strength and conditioning coach – had a lovely evasion and reaction drill we did around that time in training.

It was all about looking at the defender’s movement and trying to beat him. The defender was largely blind to where the attacker was in the drill so if he catches him there was a big cheer from those looking on.

If you beat the man by stepping him, fine, but if you beat him for pace you got the mother load of back-slapping.

Either way, the defender knows what flaws to work on.

Jayo’s drill made training fun. And that’s the beauty of this serious, ridiculously physical career; some days it is like being a kid.

Because we are out there playing sport.

Turns out the Cowman drill, which we loved doing because it tapped into our competitive nature, was replicated in a quarter-final in the south of France to overcome the European champions.

There were so many pieces needed to make up that try. Malcolm O’Kelly never gets enough credit but he can be seen shouting at Contepomi and pointing to where Denis Hickie was roaring his head off for quick ball as he had the chance to skin a lock (Fabien Pelous).

Like Clermont in Lyon, Toulouse had us under ridiculous pressure. The turnover only came off Shane Horgan’s all-or-nothing intercept when faced by a three-on-one situation 10 metres from our line. The ball ricocheted off Yannick Jauzion’s chest and Girvan Dempsey dived on it.

Felipe skips Mal to send Hickie shooting up the left touchline, where we end up with a three-on-three scenario as Toulouse had tracked extremely well.

This was the pre- or post-contact passing era in Leinster as the offload was seen as a low percentage play, especially for someone like me who hardly ever threw one.

Hickie passed inside to me when Vincent Clerc turned towards him. My options were to either carry into contact and hope to get a pass away or give it back to Hickie when the split-second opportunity arises. As soon as Clerc turns his shoulders back to me I feed Den, thereby giving Ireland’s best finisher a shot at the corner flag.

When you have genuine pace good things can always happen. The reacceleration by Den – remarkable considering he had just travelled 70 metres flat out – caught Clerc by surprise.

Not many wingers can burn outside Clerc. Denis Hickie could do it to anyone.

The counter-punch can be seen from New Zealand teams every week in Super Rugby. The All Blacks are the masters. They go for it every single time someone comes up with a turnover.

It’s about putting all those years playing tip to good use. The All Black mentality is to flood in behind an individual break so if the offload doesn’t go to hand the secondary wave will keep them driving onwards.

For these two Leinster opportunities, 11 years apart, the ball needed to go to hand because there wasn’t four or five players following up.

Sure, Robbie tracked wide and Johnny stayed alive but – and this is me just nit-picking – that level of cohesion can come in time.

Leinster didn’t win anything in 2006 or 2007. In 2008, we captured the Celtic League but it took another season before we reached a Heineken Cup final.

But a similar-looking journey has started again.

More opportunity from turnover ball will come for Sexton, Henshaw, Ringrose and Carbery. Possibly in a Pro12 semi-final or final when I would bet heavily on it ending under the opposition posts.

The parallel I’m making between Leinster then and now is we can see where their heads are at. They seem to be growing out of the same family tree.

Wayne Gretzky, the greatest ice hockey player ever, said: “You miss 100 percent of the shots you don’t take.”

That has always been the Leinster way too. And still is, now they have found their way back on to a familiar path.

I was looking at pictures from their rugby awards over the weekend and there was one with all the young lads. Ten of them just played in a European semi-final for the first time.

That represents the start of something.

1 Ken Early: Handball ‘crisis’ a timely distraction from the grim bigger picture
2 The Offload: Springbok heavyweights heading for Pro14
3 Exeter coach Baxter calls for an end to mass Covid-19 testing in rugby
4 All Blacks facing a Christmas in quarantine
5 Malachy Clerkin: Nothing compares to rich tapestry of sound offered up by GAA match
Real news has value SUBSCRIBE

Serena Williams through after a slow start in Paris 16:57
Exeter coach Baxter calls for an end to mass Covid-19 testing in rugby 16:01
Colin Keane has Shane Foley in his sights as they head for Cork 15:52
Dermot Weld’s Tarnawa won’t be aimed at the Arc 15:47
All Blacks facing a Christmas in quarantine 15:33
Crossword Get access to over 6,000 interactive crosswords