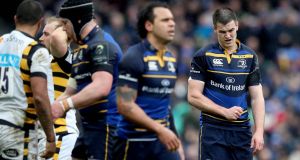 Johnny Sexton had a 100 per cent tackle success rate in the 2017 Six Nations. Photograph: Ryan Byrne/Inpho

The recent concern over the number of borderline to late tackles that Ireland and Leinster outhalf Jonathan Sexton has shipped in recent matches against England and Wasps is an understandable grievance for his coaches at national and provincial level, Joe Schmidt and Leo Cullen.

Opponents correctly identify Sexton as the playmaker-in-chief and are happy to test the boundaries of legitimacy in the timing of tackles when it comes to trying to curtail his influence. He is by no means alone in that respect: outhalves are a default target at every level of the sport; it goes with the territory.

James Haskell, Maro Itoje, Owen Farrell, Tom Wood and Kearnan Myall, to name a few on a long list, have all had a crack at Sexton and left him on the turf, more often than not requiring treatment. Sexton’s bravery is not in question nor his capacity to absorb the physical punishment without ceding a blade of grass, or a millisecond of time, in drawing the tackle to make space for his teammates.

While his coaches and captains occasionally plead for officials to be vigilant in protecting Sexton, the irony is that the outhalf demonstrates a complete disregard for his own safety, when it comes to tackling. Sexton has occasionally been critiqued and criticised for his upright style in the tackle that has left him susceptible to the odd clash of heads.

The player was able to mount a robust defence of his technique, while one or two others injected a little humour into the debate. His former coach at Leinster Michael Cheika wasn’t too far off when he observed that “Johnny is the only back to wants to be a forward”, in appraising his outhalf’s appetite for defence.

In 13 days time Lions coach Warren Gatland will announce his squad to tour New Zealand this summer. Sexton was his first choice in 2013 when the Lions beat Australia 2-1 in the Test series and would appear to be the frontrunner to continue that primacy.

Sexton’s game management and bravery are attested to not alone by visual evidence but in terms of statistics, and in the latter respect one stands out in terms of his defence. The Ireland outhalf had a 100 per cent tackle success rate in the recent Six Nations Championship; he made 23 and missed none in the three matches that he played.

The breakdown in terms of the official Accenture statistics from the 2017 Six Nations Championship is that he made nine against France, eight against Wales and six against England. He also managed a turnover for good measure.

So how does that compare against potential rivals for the Lions number 10 jersey, all of whom started the maximum five matches? Wales’s pivot Dan Biggar’s figures stand out, attempting 70 tackles in total, and completing 60 successfully, for a percentage success rate of 86. He missed just 10 and to put that in perspective, he made 22 more tackles than his closest pursuer volume-wise, England’s George Ford.

There can be no doubting Biggar’s appetite or effectiveness in defence. Ford is a maligned defender, and while there is no doubting that Bath and England occasionally shuffle him to a more remote part of the defensive line, he still had a tackle completion rate of 83 per cent: 40 made and eight missed.

Scotland’s Finn Russell tackling is significantly below his rivals, with a completion rate of 25 from 37 tackles, or 68 per cent. So Gatland must weigh up the creativity that the outhalves bring to the patterns he wants to play plus their contribution in defence when choosing the outhalves to travel to New Zealand.

And what of England’s Owen Farrell, who played inside centre for the Six Nations and made the shortlist as one of the tournament’s outstanding players? Well he made 32 tackles and missed 12 (73 per cent) in a role he largely only plays at Test level.