Quality, not quantity, the problem with Munster’s kicking 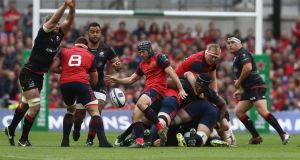 Munster’s perceived over-reliance on a kicking game as a primary attacking gambit during their 26-10 Champions Cup semi-final defeat against Saracens at the Aviva Stadium drew criticism but, as with most generalities, closer scrutiny of the 80-minutes reveals a slightly different perspective.

First and foremost, Munster’s kicking in the first half was largely well-directed by halfbacks Duncan Williams and Tyler Bleyendaal. There were a couple of exceptions, Williams over-cooking a box-kick and offering an easy catch for Saracens number eight Billy Vunipola and Bleyendaal’s smothered punt travelling into the hands of a defender less than 15 metres away.

Otherwise the kicking was pretty much on the money. Seven of Williams’ eight box-kicks were contestable, albeit that not all were contested, but some of this was down to Saracens’ clever blocking of direct line running to the catcher or flooding the area beneath and around him.

Munster kicked the ball on 30 occasions in the first half, Bleyendaal’s 16 broken down into three kickoff/restarts, four penalties (of which three were sent down the touchline and one successfully bisected the posts for his side’s only score of the half), three clearances from inside the 22, four punts and two cross kicks, one with a penalty advantage.

They put boot to ball 12 times in the opening quarter and 18 in the second 20-minutes before the interval. The Irish province employed Rory Scannell’s left foot to nudge two penalties down the touchline while Williams (9) and Simon Zebo (2) also contributed, the latter with one memorable towering garryowen, which he caught brilliantly in the follow-up. Andrew Conway also chipped and chased with the benefit of a penalty advantage.

Saracens’ 6-3 interval lead was built despite having less possession and territory but the game remained delicately poised. Munster’s main gripe at that point was that they had failed to take a couple of decent try-scoring chances during periods of dominance.

Post interval there was a marked decline in the accuracy of Munster’s kicking game, something they did less often (24 times) but that is partially attributable to the fact that they were chasing the game on the scoreboard, realistically from the 42nd minute when Owen Farrell’s penalty pushed Saracens out to a 13-3 lead.

Williams’ box-kicking/ clearances (6) became a little ragged, twice kicking out on the full, having another half charged down, allowing Sean Maitland an easy catch just outside the Saracens 22 and then going for a little dink over the top of a ruck that sailed into the welcome embrace of opposing fullback Alex Goode.

In fairness to the Munster scrumhalf he didn’t always receive the protection at rucks that he might have expected as Saracens’ forwards aggressively contested breakdown possession and were effective in their counter-rucks. Bleyendaal’s (12) accuracy also dropped a couple of notches, with a couple of ill-judged cross-kicks, a missed penalty and a snatched drop goal effort.

Replacement outhalf Ian Keatley was limited to a couple of restarts and the conversion of CJ Stander’s try; Zebo was responsible for a clearance kick inside his 22 and then a lateral chip, in the last passage of play in the game and Francis Saili, who had a hugely positive influence when introduced, put through a nicely weighted punt.

Munster kicked 15 times in the 20-minutes after the interval and then on just nine occasions for the last quarter of the game. Interestingly Saracens amassed half their points’ tally (13) in the quarter of the match in which the Irish province kicked least often.

The 20-minutes either side of half-time accounted for 61% (33) of Munster’s overall kicking game. In examining the game in its entirety, they put boot to ball on 16 occasions in the Saracens half, two of which were penalty attempts at goal and one was a missed drop goal.

So while it felt to many that the Irish province kicked away too much ball last Saturday, it wasn’t down to the volume of kicking per se, more that the accuracy of execution began to unravel, albeit under huge pressure and acknowledging the difficulty they encountered in getting positive gain-lines positions, particularly in the second half.