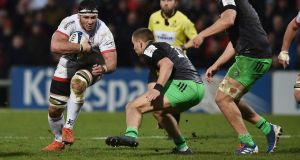 Marcell Coetzee in action against Harlequins last week. The talismanic number eight has been in inspirational form for Ulster. Photograph: Charles McQuillan/Getty Images

These return meetings in the pivotal back-to-back rounds of the Heineken Champions Cup are notoriously fickle and tricky affairs. Certainly one-point winning margins can easily be overturned a week later, especially with the aid of home advantage.

Ulster sit atop Pool 3 with three hard-earned wins out of three and, with an eliminated Bath to come at home in round six, can take a gigantic step towards successive appearances in the knock-out stages by backing up last week’s taut 25-24 win at the Stoop.

They’ve long since made the Kingspan Stadium into a fortress again, with last week’s victory being their 13th in a row in this competition. Time was when Ulster’s suspect away form undermined their best efforts in Europe, but it’s a measure of their heightened resilience on the road that they go into this game on the back of three successive one-point away wins.

Ulster have taken a particular liking to their treks to England, winning on their last three visits to Premiership clubs, beginning with a 17-5 win here two Decembers ago which set up a double over Harlequins.

They also go into this game with much the more settled squad. Dan McFarland and the Ulster think tank have slightly altered their side from last week while using the same 23 players, with lock Kieran Treadwell and winger Matt Faddes promoted from the bench as Alan O’Connor and Craig Gilroy drop to the replacements. In the process, Louis Ludik switches from right to left wing.

By contrast, although still mathematically in contention and talking the good fight, Harlequins coach Paul Gustard has made eight changes, with key men such as captain Chris Robshaw, prop Joe Marler, half-backs Danny Care and Marcus Smith, and winger Gabriel Ibitoye all rested.

However, as demonstrated by Saracens last week, Ulster cannot be lulled into a false sense of security by this.

Gustard may have one eye on next week’s Premiership game with struggling Wasps. Ironically, along with Leicester, they are the three sides immediately above Saracens who are also the Premiership’s only three ever-presents.

But look closer and, with the six-day turnaround, this Harlequins line-up has been refreshed in a way that suggests Quins are not throwing their hat at such a marquee Friday night Euro fixture, even if the majority in the crowd probably voted for Boris and Brexit.

Kyle Sinckler will captain the side on his first home appearance of the season, with Pumas’ loose-head Santiago Garcia Botta returning to the squad following his recent nuptials.

Will Evans returns to the back row after being rested for the last two weeks alongside the explosive ex-Toulouse Fijian Semi Kunatani and number eight Alex Dombrandt, who was outstanding in leading their huge defensive effort last week when making all of his 16 tackles.

Care’s replacement is Martin Landajo, the 31-year-old, 84-times capped Pumas scrumhalf, albeit 24-year-old outhalf Brett Herron, who made eight appearances for Ulster before moving on to Jersey Reds, makes his Euro debut for the club, as does the 35-year-old, Fijian ex-Leicester and Newcastle winger Vereniki Goneva.

“It is a great opportunity for a couple of our players who are returning from injury to move the jersey forward in what is a must-win game for us if we are to have a chance of competing in this competition,” said Gustard.

Harlequins will rightly feel they had last week’s match in their pocket until Tevita Cavubati’s late tackle off the ball afforded John Cooney the opportunity to land the winning penalty.

Ulster have become remarkably dependant upon Cooney, who has been their match-winner-in-chief for their three victories to date and has scored 35 of their 60 points to date. So much goes through their goal-kicking scrumhalf that you half suspect he also drives the bus to the ground, but his ability to run the show from the base is hugely helped by the carrying of their talismanic number eight Marcell Coetzee, who is also their defensive leader.

Stuart McCloskey is also a hugely important figure in getting them over the gain line, and also provides tackling, offloading and that X factor. But they left too many opportunities behind last week and, to be truthful, were ultimately a little lucky to come through.

So while ’Quins will be vengeful, a powerful spur, Ulster should still be sharper for last week’s scare. This is liable to be a different type of affair. Ulster will need to make more tackles this evening. That’s the way of these reverse fixtures especially away from home on a Friday night. So therefore they’ll need to be more clinical than last week.

But as they showed with their opportunist win in the Rec in round one, they have such a performance in their locker.