In 24 matches, 37 different individual players crossed the line for Joe Schmidt's side 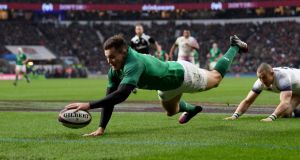 Jacob Stockdale leads the way for Ireland with 10 tries, including this one against England in this year’s Six Nations. Photograph: Shaun Botterill/Getty Images)

It’s been an annus mirabilis for Irish rugby, Leinster winning a Champions Cup and Guinness Pro14 double, while the national team produced a Six Nations Championship Grand Slam title winning campaign before heading for Australia and triumphing in a Test series against the Wallabies for the first time since 1979.

November provided the ultimate benchmarking process as the number one and two sides in the world rankings went head-to-head at the Aviva stadium. Ireland won for the first time on home soil against the All Blacks, the vanquished generous in defeat.

Joe Schmidt’s Ireland suffered only one loss in 2018, the first Test against Australia, winning the other 11 matches. There were many highlights and high points, world player of the year Jonathan Sexton’s drop goal in Paris, the performance in winning a Grand Slam at Twickenham and also the manner in which they beat New Zealand.

The evolution and development of the national side under the New Zealander has been mightily impressive, despite an occasional cavil in some quarters that Ireland can be a bit prescribed in their attacking patterns. It’s an opinion that’s not substantiated by the numbers.

During Schmidt’s tenure Ireland have won three Six Nations titles and in two of those years they have scored more tries than any other team in the tournament. In the “fallow seasons” of 2016 and 2017 they were the second highest try scorers in the Six Nations, the first year crossing for two more (15) than the Grand Slam champions, England (13), and managing a brace less than Wales (17).

In the 2014 Six Nations triumph, the Irish side scored 16 tries, two more than their closest pursuers, England and in claiming last season’s Grand Slam they crossed for a whopping 20 tries, six ahead of Eddie Jones’ team.

Only in the 2015 tournament did the national side suffer a frugal return (eight), the joint second lowest total of the competing nations. However the flip side was that they only conceded three with the Welsh next best on eight.

Looking for a set of parameters in which to compare the title winning seasons under Schmidt’s direction, the analysis is specific to the November Test series (three matches) preceding the successful Six Nations (five games) campaigns to maintain uniformity in the study sample.

There are no summer tours included in the statistics in the graphic, no Irish matches in the 2015 Rugby World Cup and none of the most recent November Test series.

Ireland scored 72 tries in the 24 matches during the period in question, which works out at a neat three tries per match, 44 in the three Six Nations campaigns and 28 during the November matches in the same timeframe.

The backs have accounted for 47 tries a shade under twice as many as the forwards (24) with one penalty try. Of Ireland’s 30 tries in the Grand Slam season 21 came through the backline and 10 alone from Jacob Stockdale.

Ireland were kept tryless three times during the period and twice by France; the first when Sexton kicked four penalties and the famous drop goal in the 15-13 win over France in Paris earlier this year and in the 2015 Six Nations game in Dublin, where Ireland won 18-11. The other occasion was a 32-15 defeat to Australia at the Aviva stadium in 2013.

There were 37 different try scorers with Stockdale leading the way in terms of the biggest individual contribution on 10, Ireland’s first choice halfbacks, Jonathan Sexton and Conor Murray next best with four apiece, and the Kearney brothers, Rob and Dave part of a group of five players – Andrew Trimble, Robbie Henshaw and Seán O’Brien – who dotted down three times.

The only position that isn’t represented in the 72 tries scored is that of tighthead prop. Schmidt has refined, tweaked and developed the national side in style, substance and personnel as an attacking entity; it’s all there in black and white.