Ahead of a clash against Saracens, the Munster prop says the team is in a good place 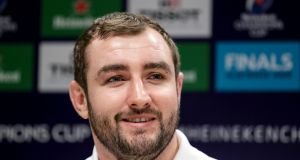 It’s nearly four years since James Cronin picked up the last of his third Irish caps. After a dreadful series of injuries and a host of young players coming through in Munster, it’s understandable that his main priority at the moment is nailing a place in the province’s front row than worrying about international duty.

A leg injury just over a year ago ruled him out for the remainder of last season but he has returned to his best this campaign with nine appearances for Munster and a memorable hat-trick for Highfield in the AIL.

He hasn’t given much thought to making the cut when Andy Farrell soon names his first Irish squad.

We’ve got two or three players per position. It’s a great place for the squad to be

Getting into the Munster side has become more difficult, even with Dave Kilcoyne out injured, as the likes of Jeremy Loughman, Liam O’Connor and Josh Wycherley are snapping at his heels.

“Yeah exactly, you can’t be looking too far ahead, you have to nail the first part down first and then maybe look down the road further ahead,” said Cronin.

“Even in pre-season, the lads coming through were really good athletes and you’d nearly question yourself, going, ‘these fellas might pass me out’, but nah, I was well able to keep up with them and I was happy enough.

“It’s good that these young lads push you and when I was young I would have really pushed the older props ahead of me, whereas now I’m getting over that hill.

“Jeremy, Liam O’Connor and Josh Wycherley, they’re all good athletes. I remember we were doing 150m runs and I was sticking with them, so I knew I wasn’t in a bad place.

“They’re all good players and it’s a really good place for Munster to be in at the minute, that we’ve got two or three players per position. It’s a great place for the squad to be.”

Tomorrow’s match with Saracens at Allianz Park is the sort of clash he grew up in Cork dreaming about playing in. Having turned 29 last month and now having played 120 games for Munster, Cronin knows he is one of the elder lemons and needs to lead from the front.

“Yeah, but they’re the pressure moments you want, you want to be playing in those big European games against the likes of Saracens and just perform, just do your job.

“There’s a bit of perspective in that I had a shocking year last year with injury and just when you pull the jersey on, you are that little more appreciative that you are playing for your home province and you’re playing in front of your friends and family, and all those things mean a lot to you.

Cronin, who made his Munster debut against Leinster in 2013 and picked up his first Irish cap in Argentina the following year, is now looking forward to a win this weekend.

“It’s just really enjoying each game now. Even the more unglamorous fixtures , there’s a bit more oomph to them. I’m really enjoying my rugby at the moment. But this is a big game, going to the English and European champions and there’s no doubt we want to turn them over and just get the win over there. That’s the plan anyway.”