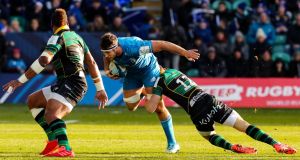 Caelan Doris in action during Leinster’s win over Northampton. “We know it’s not going to be an easy game this week. Being at home doesn’t guarantee you anything.” Photograph: Billy Stickland/Inpho

Caelan Doris is in his final year of a Psychology degree and is currently undertaking a research project on mental toughness and whether it affects a player’s ability to perform as capably away as at home.

He’ll get stuck into it in January as there are more pressing matters to attend to, specifically Leinster’s Heineken Champions Cup game against the Northampton Saints at the Aviva Stadium on Saturday.

The 21-year-old number eight will though draw on some recent personal experience when it comes to the project. He explained: “Yeah I highly enjoy playing away, I like coming up against hostile crowds. The Glasgow game [Pro 14] and t) Saturday [at Franklin’s Gardens] were very enjoyable games but that’s a pretty subjective view.”

On the issue of mental fortitude the fact that the Mayo-born, former boarder at Blackrock College, played for the Senior Cup team in fourth year as a 15-year-old speaks volumes for not only his talent but his strength of character. At that point he was just two months overage for the Junior Cup team.

Having represented Ireland at age-grade level including captaining the Irish Under-20s – he played for them at 18 – he made the first of 24 appearances for Leinster to date as a replacement during a Pro14 game against Connacht in April, 2014. His European debut arrived when coming on for the final two minutes of last season’s European semi-final win over Toulouse.

The milestones continue to be broached. A first start in the Champions Cup against Benetton last month was curtailed when he picked up a head injury after 15 minutes and was removed from the contest.

The performance against Northampton last weekend though was representative of his quality as a player and arguably drawn from the fact that he feels more comfortable this season with the challenge of trying to hold down a starting place. Saints’ outhalf Dan Biggar appeared to target Doris from restarts but the number eight was unfazed, handling them with aplomb.

He said: “I think I have come on a bit and hopefully there’s still lots of room for improvement. I’m enjoying it massively as well, which I think leads into that. The Glasgow game over there [Scotstoun] was probably the most enjoyable I have played for Leinster so far: hostile environment, -2 or -3 degrees and just how we ground out the win.

“We didn’t even give them the bonus point towards the end so that was incredibly enjoyable. The Heineken Cup [against Saints] was special as well. I’ll stick to the same core principles, running hard and good footwork, things like that.

“There’s obviously not as much space at this level. Bodies are bigger and guys are better decision-makers as defenders. It’s probably just adjusting to that. I haven’t tweaked too many things in terms of my carrying. I’m making a few more metres this year than last year anyway.”

So what areas of his game has he identified to continue refining?

“Just continue winning collisions on both sides of the ball, making as many metres as possible off carries and hopefully freeing up my hands and bringing more offloads back into the game as well, which was probably one of my strengths at underage. Obviously it’s harder again at this level but hopefully that will eventually shine through.”

He initially bats away enquiries about ambition relating to Andy Farrell’s first Ireland squad as head coach later this month.

He pointed out that his focus is on trying to keep hold of the number eight jersey at Leinster – Max Deegan has been excellent too this season – but when pressed on the matter subsequently he admitted: “I genuinely haven’t thought about it too much but I suppose naturally if you’re starting eight for Leinster, obviously with Jack [Conan] out as well, and if you’re performing, there could be an opportunity there.

“But as I said my focus has been on performing for Leinster and doing my best there, and not worrying too much about what will happen in the future.”

Doris is in possession of the blue jersey for the time being but that’s predicated on backing up each performance and ensuring consistency if quality terms. Saturday presents the next opportunity.

Northampton’s victory at the Aviva in 2013, a week after being pummelled at Franklin’s Gardens, has received plenty of airing in the Leinster team room this week; the clock has been reset to zero.

Doris said: “We’ve talked about it, not getting complacent. The scoreline probably flattered us a bit at the weekend. Going in at half-time there was only a couple of points in it and they had quite a lot of opportunities.

“Even in the second half we were defending for large parts of it so it probably came down to taking our opportunities more than they did and it ended up with a pretty nice scoreline. We know it’s not going to be an easy game this week. Being at home doesn’t guarantee you anything even though it is an advantage.

“We’re pretty determined not to let that [a repeat of the defeat in 2013] happen and put in a good performance. There’s quite a lot we can still improve on which is quite exciting.”