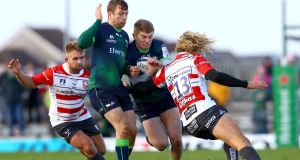 Connacht will welcome the return of three key players for the first of the festive interprovincials when Munster visit the Sportsground on Saturday.

Fullback Tiernan O’Halloran is expected to make his first appearance since a leg fracture against the Dragons two months ago, fullback Stephen Fitzgerald has recovered from an ankle injury, and Quinn Roux, having missed last weekend’s game with a chest infection, will make his 100th appearance for Connacht.

However, coach Andy Friend says there are still some selection headaches, most notably for the pivotal No 10 jersey, which youngster Conor Fitzgerald held in the absence of Jack Carty at the World Cup.

With Carty struggling to find form since his return, having been omitted from Andy Farrell’s first Ireland training camp, and ruled out for the next two interprovincials as a result of minutes played in Japan, Friend says the selection for the pivotal position is “tricky”.

“It is a tricky one because we feel what Conor is doing there at the moment is good, and there is confidence around him. So, do you break a bloke in flow for a guy who is trying to find it? And we do know Jack is going to be away for a couple of weeks, so yeah, it’s a tricky one. We do want to support him, at the same time it’s a crucial game for us.”

Friend, however, believes Carty is still one of the most complete footballers he knows.

“Jack has to trust his instinct. His instinct is brilliant and he sees the game better than most players I’ve seen, and that is what we saw last year. At the moment he is trying to find those things rather than relax and allow it to come to him. I have spoken with him, and the message is to take it easy.

“I know he’s had a good chat with Andy [Farrell] and is comfortable with that, but again when you have been there and now you are not there, you start to question, start to search, and it’s tricky spot to be. It’s easy to say relax and be patient, but that is literally the message, that’s what you have to do, trust your game and your instinct.”

Bundee Aki, Caolin Blade, Dave Heffernan, and locks Ultan Dillane and Quinn Roux are named in the Irish training squad, and Friend says both second row players are being rewarded for a strong season.

“They have been great for us. Quinn plays his 100th game this weekend which is a great milestone, and he has been immense for us. And Ultan, I thought he had his best game of the season and it’s good to see him coming back to form.

“Every weekend they get their chance to show what they have, and both are very different footballers. Ultan is dynamic with ball in hand, carries really strongly, defence is solid; Quinn’s physicality has been enormous and I do believe there is no better lineout caller in the country. He sees the game so well there and controls it really well, his set piece stuff is brilliant.”

However, also missing out is scrumhalf Kieran Marmion, who remains sidelined with a back injury, and prop Finlay Bealham.

“Finlay was in the World Cup squad, but didn’t unfortunately go, but he’s been going so well because Dominic Robertson-McCoy is pushing him. But he’s not there and that is a shame for him.

“Kieran just hasn’t really played this year. It’s tricky for him, but you know he’s a quality player and you know he will come back. He’s a fighter. I’m sure Kieran would like to be there, but if there’s one bloke who will get the bit between his teeth with that, it is Kieran Marmion.”