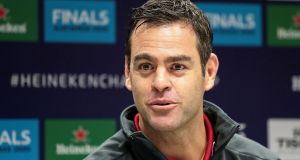 Munster head coach Johann van Graan: ‘Pete has developed tremendously as a captain and as a player over the last two years and I think he is playing very good rugby.’ Photograph: Laszlo Geczo/Inpho

Van Graan said that O’Mahony, who became the youngest player ever to captain Munster when he led them out against the Dragons when he was 22 in 2011, has all the attributes to lead a side.

O’Mahony took over as permanent Munster skipper in 2013 and since then has captained both Ireland and the Lions on a temporary basis.

“I’m sure Andy has got his plans and I’m very excited for him to take the national team forward, I certainly think Pete might be one of his candidates and if he selects Pete, Pete has been the captain before,” said van Graan.

“He was captain when Ireland beat Australia in Australia and has been the Munster captain for a long time. I’m sure he will do very well, Pete has developed tremendously as a captain and as a player over the last two years and I think he is playing very good rugby.

“I think things that he has targeted like his ball carrying ability has been really good the last two weeks and he has got influence. A lot of the time he’s a silent leader and his actions a lot of times speak louder than words.

“I’ll use the Exeter game of last year. He went off with a rib injury against Gloucester and a week later he played 80 minutes against Exeter leading this team from the front. The one thing you can say about Peter O’Mahony is that he turns up every Saturday and he looks someone in the eye and when he speaks the team listens. If he gets selected as Ireland captain he’ll do a great job but luckily that’s Faz’s job and not mine.”

Of more immediate concern to van Graan and O’Mahony is their Heineken Champions Cup survival against reigning champions Saracens at Allianz Park on Saturday.

They are waiting on the outcome of a disciplinary hearing today but it’s expected that Arno Botha will be banned after being sent off in the final play of Saturday’s 10-3 Munster victory at Thomond Park.

The return of another South African backrower Chris Cloete from injury is timely as Munster bid for the win which will take them one step closer to the knockout stages and all but eliminate the reigning champions Saracens.

“Yeah, it’s a boost. We’re very glad that he’s back in training but you know he will obviously get contact today in terms of the team for the first time he’s been out for a bit of time so. Also, there is a difference between return to training and return to play so he is available for training but we will see how the week goes,” added van Graan.

The injury to Sexton has opened up opportunities for others but Joey Carbery, and even Tyler Bleyendaal, are just not in a position to challenge at the moment through injury and van Graan doesn’t expect them back soon.

“There’s still no real update. We hope to have Joey back before the end of the month and I just want to reiterate that he hasn’t been close to team training. I think that is going to be the next thing.

“Again I’d love to pick him as soon as he comes back but it’s going to take time. After last season from our point of view he was injured for a long time and we started him in that quarter-final against Edinburgh, was out and then we started him again against Leinster but specifically your 10 needs time so hopefully as soon as possible but hopefully before the end of the month but I have got no specific date.

“Tyler we said might be a bit longer. He’s obviously with the team the whole time, influencing but he hasn’t touched a rugby ball again.”

Van Graan agreed that taking down the champions in their own backyard would be a signature win but he knows the challenge that awaits them against a Saracens side which will be fully loaded this time.

“Certainly from a club perspective we as a group said when the draw came out that they’re a team we haven’t won against since 2014 and we’ve done that over the weekend and to go away to a team like Saracens.

“Only Clermont have managed to beat them there so a massive challenge ahead and I think the important thing from our side is to stick to the process and we shouldn’t focus on a win or a loss or a bonus point or four tries.

“You’ve got to go out there and play well and I think that’s something we are looking to improve. As you would have seen we are playing more but also finding a balance and hopefully winning the game,” added the South African.

Here is your handy guide to sport on television this week 17:01
Charles Byrnes can saddle runners ahead of appeal against six month ban 17:00
Leicester’s second-half barrage blows Brentford away 16:51
Joe Root’s mammoth vigil ends on final ball of the day 15:00
Tammy Abraham’s hat-trick steers Chelsea past Luton Town 14:36
Crossword Get access to over 6,000 interactive crosswords