Stapleton and Hayes relishing rugby once again after quitting Ireland 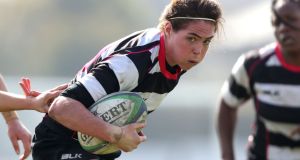 Old Belvedere’s Nora Stapleton: “I’m back where I started, playing for the love of it with my club. And it’s all about the club now, it definitely changed my life.” Photograph: Bryan Keane/Inpho

As they prepare for Saturday’s All-Ireland League final in Portlaoise, UL Bohemians’ Fiona Hayes and Old Belvedere’s Nora Stapleton share a sense of having come full circle in their rugby careers.

The pair were comrades on Ireland’s most memorable days, when they won the Grand Slam back in 2013 and beat New Zealand in the World Cup the following year, but by the time they had hung up their international boots both felt a certain weariness from it all.

Hayes had stepped away from the international scene by the time the 2017 World Cup came around, but Stapleton played in what proved to be a desperately disappointing tournament for the team, her 50th and final cap coming in the seventh place playoff defeat to Wales in Belfast.

Neither player has any regrets about the efforts they put in to forge their international careers, but in the end the accompanying pressures and demands tested their love of the game. A love that has, they both say, been rekindled since they found themselves back where they started, just playing for the love of it with the clubs where their rugby journeys began.

“The stress levels were getting too high, so I decided I just wanted to stick with the club and Munster,” says Hayes, “and this year I’ve absolutely adored it. When you’re training so hard and you’re travelling up and down to Dublin, you just have to ask yourself if it’s worth it. It would be different if it was your job and you were getting paid for it. Everybody wants to play for their country, but, yeah, the stress, the workload, the gym sessions, everyone still working as well . . . it just became heavy going.

“And I know from talking to a lot of the players over the last couple of years that the buzz was just gone from the Irish camp. You could see that watching them in the World Cup. I’d played with them, I know the talent that’s there, there’s a lot more to be got out of the Irish girls, but you have to get the old ethos back, that buzz, that good feeling. Do that and I think we’ll blossom again. But most of all, you have to enjoy it. If you don’t, what’s the point?”

Stapleton echoes that view, her experience playing for the Barbarians back in November helping revive her passion for the game after the World Cup had left its scars. “The Baa-Baas’ whole culture is about playing for the love of the game. It just reminded me of the reason I started playing rugby in the first place, because of that exact feeling, because I loved it. It all started flooding back, the pure enjoyment of it.

“So, getting back with Belvedere meant being able to go out on to the rugby field and just try whatever you want, have a go at things. There’s a lot less pressure, you’re not worried about making a decision that might end up being the wrong one. Up until the end of the World Cup you were always conscious of what people on the sideline thought of you, your decisions and your actions on the pitch. And I would never have felt that before getting on the Irish team. So, yeah, it’s kind of come full circle. I’m back where I started, playing for the love of it with my club. And it’s all about the club now, it definitely changed my life.”

And rugby remains an all-consuming passion for both women, 34-year-old Stapleton working as women and girl’s development manager with the IRFU while Hayes has coached the UCC women’s team for five years.

“I’d be ambitious all right with the coaching, I absolutely love it, it’s definitely something I want to progress in,” says the 35-year-old Limerick woman. “I’m obsessed with the game. I would sit down and watch every single rugby game on telly. I just love it, the way it keeps evolving, you see something new constantly. I was watching a game the other day and there was a move off the line-out and the Highlanders scored, so I sent a video of it to the Bohs’ WhatsApp group. I got one reply,” she laughs. “I’m sure they were thinking ‘we have one more training session left, we are NOT going to learn this big move now’.”

One of the proudest moments in Hayes’s career came a year ago when she captained Bohs to victory over Belvedere in the All-Ireland League final, ending the Dublin club’s quest for a four-in-a-row in the competition and getting the Limerick side back to winning ways after their 11 triumphs between 2001 and 2013. The two clubs have, then, been the dominant forces in women’s rugby.

Bohs are favourites to retain their crown after a league campaign that saw them finish 10 points clear at the top of the table, the only blip in an otherwise flawless run of results their defeat to Belvedere in January. “We were both missing our Irish players, but I’m sure they’ll take confidence from that result,” says Hayes. “We had to have a look at ourselves after that game, people hadn’t really trained much over Christmas, too many turkey dinners. But we turned it around after that. And we’re at full strength again, having Niamh Briggs back at 10 is great – and they’ll have Nora at 10, so that’s two wise heads, it’ll be some battle there.”

There’s been a long history of battles between Stapleton and Briggs, and not just in rugby. Back in 2010 Stapleton won an All-Ireland Intermediate medal in Gaelic football with her native Donegal, Waterford their opponents that day, their team featuring Briggs. Hayes is a sporting all-rounder too, soccer her other chief passion, five years ago winning the FAI Intermediate Cup with Douglas Hall.

But rugby is their sole focus now and there’ll be an element of “friends reunited” about it all on Saturday, between them the clubs contributing 12 players to Ireland’s Six Nations squad earlier this year. And they also include a smattering of retired internationals, like Stapleton and Hayes, who were Irish team-mates for so long.

One of the other benefits from their Ireland days being over, says Hayes, is having a social life again. “Ah, you’d have missed it all right,” she laughs. “When you’re going up to watch the Irish girls play now you can do it with a pint in your hand. When I’d be warming up for Ireland I’d be looking at people standing there with a pint and thinking, ‘Ah, that used to be me’. I missed it. But I’m back there again, watching the games with a pint in my hand. And I love it,” she says. “So yeah, back where I started.”