For so long in the shadows, Holland now a regular starter for Van Graan’s side 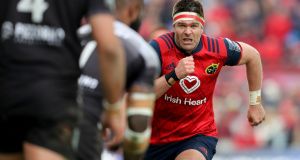 Billy Holland: will be making his 14th European start in a row when he lines up against Racing 92 in Bordeaux. Photograh: Dan Sheridan/Inpho

If at first you don’t succeed and all that. Time was when Billy Holland could scarcely get a look in, what with some fella called O’Connell on the scene, not to mention Donnacha O’Callaghan, Mick O’Driscoll and Donnacha Ryan. But now he’s Mr Dependable, and hardly misses a beat.

Others, such as Dave Foley and Mark Chisholm, were also ahead of him in the second-row pecking order, so much so that going into last season’s European Champions Cup, Holland had started only three matches in the competition over his first seven seasons in Munster’s squad.

Sunday’s semi-final against Racing 92 in Bordeaux (kick-off 3.15pm Irish time) will be his 14th European start in a row. It will also be his 25th start in 26 appearances this season (racking up 1,817 minutes, the most of any Munster player). Holland has completed 80 minutes in 18 games, including all their Champions Cup games save for the final quarter at home to Castres in round six, when Munster had already secured a home quarter-final.

Locks tend to go on longer than most and, at a still modest 32, Holland could have plenty left yet given his low mileage until recent times. That he is the oldest player in the squad perhaps says more about the squad’s age profile than his own. But having suffered his first semi-final defeat last season, he knows there’s no guarantees chances like this will come along again.

This will be Munster’s fifth semi-final since their second Heineken Cup triumph in 2008, and, noting that Keith Earls is the only surviving member from a decade ago, Holland admits: “Personally it [reaching the final] would mean the world to me. I suppose the older you get the more you realise how difficult it is to get to this stage of a competition.”

"In the week that is in it, you are not going to try and get too emotional, too caught up in how great the euphoria would be. I have dreams of winning the European Cup but you cannot sit there and dream about it. You have to focus on the technical side of things to help get us that step further than we were last year.”

This match-up is given added piquancy in that Simon Zebo could again be running into his future employers and, perhaps more pertinently, Holland’s one-time second-row partner Donnacha Ryan is again applying his insider knowledge against his former team.

Ryan missed Racing’s pool defeat in Thomond Park, but played a major role in the Parisians’ 34-30 win at the U Arena in round six, albeit Munster managed to restrict Ryan’s inroads into their throw.

“In that game we had eight lineouts and we won seven,” recalls Holland.

“Donnacha knows our lineout system as well as I know it. It’s been around for a few years and he knows how it works, but you can’t change things for one game. If you do, I’m confusing myself along with the other seven forwards out there.

“Does he have an advantage, and do Racing have an advantage in comparison to other teams? Yes they do. They’ve a perfect insight into what we do, but you just end up confusing yourself too much if you try and double bluff them, for want of a better word.”

Munster had worked their way into a 30-28 lead with five minutes remaining last January through a long-range Conor Murray penalty when Ryan turned an average restart into a match-winning one with a long-bursting chase to earn Maxime Machenaud the first of two late penalties.

“Everyone knows what Donnacha is like. In the 75th minute he comes out of nowhere and steals a restart. He doesn’t give up. I think he’s brought an added level of doggedness to Racing. They’ve always been a quality side but I think they’ve gotten fitter and I think they’ve a never-say-die attitude, and you’ve seen that in a couple of their games this year, and particularly when he’s been playing.”

The mutual respect was such that there was no banter during the match, and they shared a beer in the Munster dressing-room afterwards.

“Hopefully we’ll be doing the same this weekend with the result the opposite way around. But he’s a tough opponent. I wouldn’t fancy playing him every week.”

As well as Racing’s improved fitness since January, Holland also highlights that they have conceded the least tries (42 in 24 games) in the Top 14 as evidence of their improved defence.

He also conceded that Munster struggled to contain Racing’s big ball carriers at the start of each half in the U Arena and, although Munster limited Leone Nakarawa’s famed offloading game, he admits the forecast temperatures in the high 20s will suit Racing’s offloading game. Hence Munster’s defence will need to be more dominant.

However, Holland believes they can learn from last year’s semi-final loss to Saracens.

“I personally feel we are in a better place. I think we have added a few strings to our bow this season. Maybe we were a little bit one-dimensional at times. From an experience point of view, there are another 20 fellas who have experience of playing in a semi-final and the pressures of it.

“You’d like to think you’re further down the line but the proof is in the pudding. We’ll know more on the Sunday night – are we a better team than we were this time last year or are we still a little bit off it.”