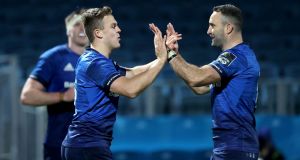 Ryan Baird came though his first match back, Dan Leavy continued with his building after a long stretch out, Michael Sylvester scored his first try and Leinster looked as they ever have going forward and scoring tries, this time six.

Before the flogging Leinster had averaged 40.5 points a game in their unbeaten run, their seventh bonus point from seven outings equalling the record. Looks like that average won’t change much. It’s becoming increasingly difficult now for coach Leo Cullen to see what’s out there that can stop them.

“I thought our guys played well right from the off,” said the Leinster head coach. “Dave Kearney got in for a good try. Jimmy O’Brien got in for a good try and then I thought it got a bit scrappy. A big moment was getting the try at halftime. We played the game in the right places in the second half but I thought we just missed that bit of composure at certain times.”

Cardiff came in sitting in second place in Conference B with Leinster first in Conference A - conventional thinking would determine that’s not a great deal of separation in levels. But the longer the match went on that one place seemed like worlds apart.

Leinster’s early blow to Cardiff morale came when they took the lead after just 37 seconds, the ball was worked out left with centre Ciarán Frawley showing enough acceleration to leave the Cardiff line grasping at air. His break took him into the Welsh side’s 22 with a hungry Kearney supporting on his outside for the easiest of finishes.

Minutes later a slaloming run from Cian Kelleher ended with him slipping yards out from the Cardiff try line - but the second Leinster score wasn’t far off when 14 minutes later O’Brien decided to kick and chase.

His dink just yards from the left touchline bounced nicely for him to snap the ball from the hands of covering outhalf Jason Tovey, and his run home was just long enough to allow him savour what he had just done.

But Cardiff were far from lying down as the match settled into a contest in the middle of the park with Leinster doing most of the punching though in their own half and captain Rhys Ruddock again showing leadership and impact.

But it was the Welsh team that scored the next try, a well worked move across the entire backline deep in the Leinster 22 stretching the home defence enough to allow winger Aled Summerhill squeak into the corner for 14-5.

Leinster were far from cruising home and only a fumble from outside centre Ben Thomas after Garyn Smith cut through on the right and the scores going into half time could have been closer. Outhalf Harry Byrne, varying his game, shaved the post with a penalty and as hard as Leinster worked they just couldn’t put further distance on Cardiff until two minutes from the break.

Then it came quite easily. Ruddock rose to collect an attacking lineout ball. Leinster threw bodies at the rolling maul and Cardiff could do little with a controlled collapse finally rewarding them with the third try. Leinster hooker James Tracy emerging with the big happy face and third home try for 19-5 at halftime.

Again when the bonus point looked certain Cardiff continued to force Leinster to work hard for whatever they got. Three reset scrums after Leinster had failed to ground the ball - having pushed Cardiff back - went begging before the visitors cleared their territory.

By midway through the second half Leinster stepped it up and Cardiff began to fracture. With Scott Penny coming into the game on 52 minutes, they added strength and freshness. Within 12 minutes Penny was making a difference as Leinster went into recycling mode inside the Cardiff 22.

It was the replacement backrow who found the space - muscling in for Leinster’s fourth bonus point try on 66 minutes. Six minutes later it was Penny again doing much the same with bodies all around him, Byrne again converting for 33-5.

“Scott Penny to come into the game and get a couple of tries, Michael Sylvester too. It’s made a good impact,” said Cullen. “Rhys Ruddock was great. I would love to see him getting promoted up (Ireland) again.”

To further gild the score, Byrne, who had been kicking well to the wings all evening decided to put one behind the Cardiff line inside the 22 knowing Sylvester was in motion.

A kind bounce and O’Brien’s halftime replacement was celebrating his first try for Leinster and the sixth of the match. Three tries from the starting team and three from the bench. Not a bad night all round and Luke McGrath taking man of the match too.