James Lowe ready ‘to show up’ physically again against England

‘You have to stand up for that sort of stuff. You know it’s coming. Try and channel it’ 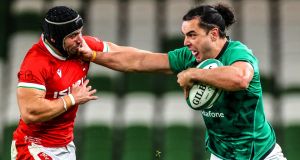 “Who?” asks James Lowe feigning ignorance, pretending the name is new to him. Johnny Sexton. “Yeah mate, we’re grand. He didn’t die. He’s still in the building. He’s going to be barking at us all week as he always does.”

Infectious Lowe likes to ‘to and fro.’ It’s the same on the pitch. He’s in opponent’s faces, off his wing among the bodies, annoying and irritating. The opposition don’t generally like him. It’s a badge of honour for Ireland’s new cap.

He’ll have a go off the captain too. Part of Lowe’s lure has been his cheeky charm and his way of playing, a kind of full assault on the opposition. A winger who believes the touchline is way too tranquil. Niggle, if it’s not there he’s unhappy. It was there against Wales.

“I reckon I’ve got a target on my back. I don’t know what’s going on but you’ve got to front foot that sort of stuff right from the get go,” he says.

“But that niggle side - you have to stand up for that sort of stuff. You know it’s coming. Try and channel it. Don’t let it get to you and when you get a chance to really get physical with ball in hand or in the tackle, that’s when you show up.

“For 80 minutes you’re going to hate each other. You’d speak to Sexto’ and he’d be like, ‘look, Peter O’Mahony is one of the nicest blokes you’ll ever meet.’ But then you play against him and, man, I just want to run over him. I just want to chirp at him. At the end of the day that’s footy. But, no, they’re (Munster players) all great blokes. It’s just a shame they wear a red jumper!”

His first cap-first try joy did not come by accident. Nor was it a surprise to see Lowe’s untied, tossed hair and gaping smile. Any straw poll before the match against Wales and his name would have been in most people’s thinking to be among the scorers. One of his strengths is to find the action.

It has always been so during the run into his residency qualification. With Leinster the freshness to the way he plays has been a testament to diversity and contrasting rugby DNA making Leinster a team better.

A few weeks ago, Leinster had nine St Michael’s College players on a match day squad. Kudos to the school, the players and the great coaching. But long term, for Irish rugby is it a good thing? Is the ethos, thinking, everything, diverse or rich enough to push Ireland beyond future Rugby World Cup quarter-finals?

“As that scrum was packing down, I was talking to Caelan (Doris), who had a barnstorming game as well, and if I hadn’t told him to pass, he was never going to pass it,” says Lowe. “Then the scrum sort of re-set, I went back and talked to him, I was like, “look, we’re gonna get channel one, you’re gonna break off this, the 10 is gonna jump at ya but I’m gonna be right there so please pass me the ball” and he did.

Lowe’s whole family were watching back in New Zealand. It was 8am on the South Island when the game started and as he tells it, his father, a quiet man was drawn into the emotion of it.

At 28-years-old the first cap has a different complexion to it than a cap won by a teenager. He can experience it through the eyes of someone who left his home to travel across the world for a goal now attained. With that decision three years ago there were no guarantees. But Lowe played like he belonged. The step up taken looked comfortable. He wasn’t about to allow the opportunity anesthetize him.

“Aw mate, ever since I came into camp, there is an eerie tension, I would say. And that’s good, it keeps you on edge,” he says. “It keeps you wanting to ask questions to make sure that when it comes down to pressure situations, you’ve got all your ducks in-a-row - you’ve got all your information, because everyone has got the skill set to be able to perform.

“But at the end of the day, it’s the fine margins. It’s the little details that go a long way to performing on the international stage.”

And with that he’s gone. A whirlwind blowing through the camp.