‘I thought the character, as you would expect from any Irish side, was second to none’ 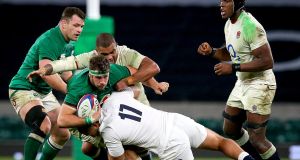 For all the negativity immediately swirling around Ireland’s third successive defeat at Twickenham in the last 16 months, head coach Andy Farrell maintained that the gap between the two sides is narrowing.

“Of course you see signs [of that] because some of that stuff out there is absolutely priceless for us. I heard James [Ryan] say before about the journey that we’re on in comparison to England – it’s a completely different side of the spectrum really.

“We’ll learn a lot about playing against a really good side, number two in the world, at home. We’ll learn invaluable experiences from dealing with pressure basically, the pressure that they put on – whether we’re going to stick to task or making decisions or go into our shells, etc.

“We’ll analyse all those decisions and make sure we take some good learning from it.”

Viewed purely in the context of the actual scorelines the gap would appear to be gradually closing, although once again the result was never really in doubt as England comfortably kept Ireland at arm’s length. The suspicion also lurked that they were quite comfortable in doing so.

Nonetheless, Farrell also took encouragement from the resilience which the side showed, and the individual growth he believes will come from this experience.

“I thought the character, as you would expect from any Irish side, was second to none, especially in that second half. Some individuals became proper international players, I would have thought. There were some immense performances and from guys that would look back and be a little bit disappointed, they’ll be bigger and better for the experience as well.”

Farrell paid due tribute to England, containing many of the side where he was formerly assistant/defensive coach including, of course, his son Owen.

“There’s a smart side, they understand what they’re about and what their plan is all about. They’re relentless in sticking to it.

“I suppose set-piece pressure, certainly from a defensive point of view they obviously did a job on us there. As far as the exiting and kicking game, on contestable kicks they hit man and ball and right through that first breakdown. That makes that first one slow and therefore, you send your forwards into a brick wall on the next one.

“What do you do? Do you keep playing 20 metres backwards or do you kick the ball. They controlled the defensive side of their game very well, disrupted our ball and made us play off slow ball.

“Obviously, they came out with the result on the back of that.”

Ireland lost four of their 17 lineouts, all of them in attacking situations, but Farrell disagreed that the Irish lineout crumbled as it did in Paris, saying: “Not really. That’s what I’m talking about regarding pressure. People react in different ways, don’t they? A lineout has to be as cohesive as it possibly can. There were obviously a few overthrows and we’ll analyse the rest.

However he accepted that as well as the lost or crooked throws the quality of Ireland’s lineout ball was also affected by England’s effectiveness in pressurising the throw and bringing down the maul.

Even so, he was not unduly concerned.

“No, I’m not. As I said during the week and over the last couple of weeks, it’s a completely new lineout. Devin Toner has dominated our lineout and done an unbelievable job over the years with Rory Best.

“Iain Henderson has been the next cab on the rank there in terms of dominating our lineout and being a leader but he’s not been available to us.

“So it’s invaluable stuff for James Ryan. James Ryan and Iain Henderson have been working closely together and we’ll get there. We’ll fix it, because that’s the type of people that we are.

“Rónan [Kelleher] starts here for the first time. He’s played one game coming back from injury. Again that’s priceless learning for him and he’ll be better for the experience. I thought Rob [Herring] did pretty well when he came on so it’s a new line-up and we’ll learn from this experience and get better.”

Ryan himself conceded there were “some issues yeah”, adding: “It was just a collection of errors really. It’s so important at this level to be accurate so it’s definitely one big learning that we’ll take.”

No less than Farrell, Ryan emerged from his first experience of captaining Ireland believing that the gap between the two sides is closing.

“I thought we created loads of opportunities. The next step is taking them. The other side of that was I thought the spirit was really good, especially after that second try when we had that moment in their 22. We didn’t quite nail it and they went the length of the pitch and it would have been very easy of us to dip our heads there but we just kept banging on the door.

“Same with the second half, it was just little inaccuracies that kind of gave them points but we’ll take loads from that and I’ve no doubt that we’re going to keep building.”