Even if this is a one-off for the tech giant, its involvement will raise the price in future 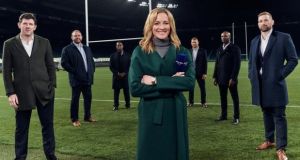 There has been little cheer for rugby unions and clubs this year as restrictions imposed by the pandemic have reduced cash flow to a trickle, prompted wage cuts and led to a run on reserves, but Amazon’s £20m (€22m) involvement in the Autumn Nations Cup, which starts on Friday night when Ireland face Wales in Dublin, is being seen as a lifeline.

After a decade in which television and sponsorship deals have failed to cash in on the game’s popularity, according to a report published this month by a leading sports analytics company, Nielsen Sports, will Amazon’s first foray into rugby help generate a bidding war for the rights to the Six Nations from 2022 and the autumn window in Europe?

“I do not see them as a white knight for the sport,” says Nielsen Sports’ Phelan Hill. “The Amazon model so far has not been embedding in a sport and growing an audience. They are opportunist, looking to protect their Prime customer base which is commerce, and I think they are trying to get a buzz from rugby before the Christmas shopping period.

“There are not many major sporting properties available in November and a one-off event aligns with Amazon’s DNA. They will be innovative in their coverage, but my feeling is that they are not in this for the long haul but will be looking for the next opportune moment.

“I cannot see them investing in the Six Nations because it would mean having to grow an audience base, but what will be interesting in the coming weeks is whether they look to use the matches to drive the sale of merchandise: as you watch a game you tell Alexa to order a jersey.”

The report showed that rugby union is the sixth most popular sport in the UK with 12 million fans, behind Formula 1 but ahead of cricket, with greater appeal to younger and more female audiences, yet “rugby union properties have significantly lower annual media rights values in the UK compared to other major sports competitions” despite the relative affluence of its followers.

“A problem for rugby is its calendar,” says Hill. “The Premiership season starts next week, but for the first three weeks the leading players will not be involved. It needs a more joined-up approach, such as the proposed global season, because a fragmented landscape with a tug-of-war over players weakens your product.

“Sport has changed. Teams used to be what people aligned with but in the digital world they are attracted much more by star individuals, especially the young. They want to see them more than a team. Weakening the Premiership when internationals are played has to change. Imagine if Barcelona only had Lionel Messi for half their matches. There needs to be a restructuring because it is as poorly joined up as football was before the advent of the Premier League. The game is massively undervalued from a revenue perspective.”

Which is where CVC has come in, taking stakes in Premiership Rugby and the Pro14 and negotiating for a piece of the Six Nations. “They will see that if everyone is not pulling in the same direction, what sort of game do you have?” says Hill. “The delay in the deal with the Six Nations is a sign of the Covid times, with so much uncertainty around. Doubtless they will be trying to push the price down while the unions will be saying it is just a moment in time, but the huge impact the pandemic has had on revenue will focus minds.”

Amazon enjoyed a 35 per cent increase in its Prime subscribers after televising two rounds of the Premier League last year. Richard Cramer, the managing partner of Front Row Legal, believes that even if the tech giant use the autumn cup as a one-off, its involvement will raise the price in future television negotiations.

“It gives the Six Nations extra bargaining power,” he says. “The more players at the table, the higher the stakes. There is a thirst for good-quality sport on television and it will be interesting to see the audience Amazon generate outside the countries involved this autumn. The likes of Facebook, Google and Apple will be interested in the viewing figures and the broadcasting scene has changed dramatically in recent years, no longer confined to a few terrestrial stations and Sky.”

One reason for the undervaluation the report focused on was that the Six Nations has so far resisted offers from pay television. As Steve Phillips, the interim chief executive of the Welsh Rugby Union said this month, that is set to change, with finance now considered more important than viewing figures and reach.

“It is about survival,” says Cramer. “The losses the unions have sustained will take years to plug. The fabric of the governing bodies and jobs are at stake. With reserves being depleted, they will go to the highest bidder. A problem is that predators sense desperation and that is where CVC come in because they have a strong vision and skilled, experienced negotiators in broadcasting. The pandemic has provided the opportunity to sort out the domestic and international calendars. It needs to be taken.” - Guardian