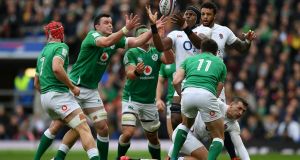 James Ryan and Maro Itoje compete for the ball during the 2020 Six Nations match at Twickenham back in February. Photograph: Dan Mullan/Getty Images 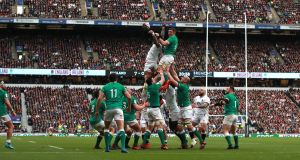 CJ Stander and Maro Itoje compete at the lineout during the 2020 Six Nations match at Twickenhan. Photograph: David Rogers/RFU Collection via Getty Images 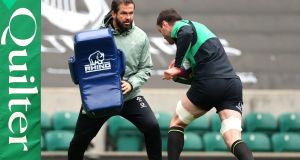 If ever a game was as much about the performance as the result it’s this one. Sure, any win over England is to be cherished, all the more so after three successive defeats. But the haunting damage caused by those losses, subsequently compounded when Leinster were spooked by Saracens, means first and foremost Ireland have a few demons to exorcise.

It’s not a Six Nations game after all, but it is important in the context of next year’s meeting in the Aviva Stadium, scheduled for the final Saturday in four months’ time. Viewed in that light, this game is not unlike doing the ‘mock’ before the Leaving Cert.

At the very least Ireland need to go into next March’s game against the World Cup finalists and recently crowned Six Nations champions feeling better about themselves mentally. So whatever about Saturday’s result, they need some mini victories, be it the set-piece holding up, not being dominated in the collisions, breaking even, or better, at the breakdown, making more line breaks. Tangible things to build on.

That said, there’ll be no need for any pre-match videos in the away dressingroom to stoke up the Irish players, not that it’s necessarily a bad idea on the anniversary weekend that’s in it.

However, even without fans, this one could be pretty spicy from the off. The Irish players must be tired of the pre-match narrative revolving largely around being bullied by England thrice over, of being told they’re ‘soft’.

Just think about James Ryan’s palpable anger from all the Maro Itoje-led goading here last February and him using those memories following his elevation to the captaincy.

Like the rest of them Peter O’Mahony, overlooked for the captaincy despite his greater experience of the job provincially and with Ireland (nine times) and the Lions, won’t be inclined to take a backward step either.

He’ll also bring Munster dog, big plays, supreme lineout skills and another poacher, while Caelan Doris’s strong, all-court game is made for days like these, as is CJ Stander’s work-rate. Yet Will Connors did contribute to nullifying Billy Vunipola in that Leinster-Saracens quarter-final, but his chop tackling to bring the poachers into the game has been kept in reserve.

So much of England’s approach under Eddie Jones is predicated on imposing what he distastefully calls their “absolute brutality”. Without Manu Tuilagi, and up against a muscular-looking Bundee Aki-Chris Farrell combination, England don’t look as well equipped to bully in the midfield exchanges, but if Vunipola and co start smashing through tackles, and their defensive shooters start nailing Irish carriers behind the gainline as they did last February, this could be another long afternoon in Twickenham.

It is in that scenario that England can turn the screw, more through their inventive kicking than their running game. Anyone tuning in solely for England’s six tries against Georgia last Saturday, featuring three from lineout drives, might have presumed there was a barrage of penalties to the corner.

In fact, five of the tries originated from kicks in open field which found grass in the Georgian backfield. There was a chip inside the 10-metre line after six phases from the base by Ben Youngs for Elliot Daly to chase; scrum ball on halfway moved to Jonny May, who grubbered along the touchline; a long kick in behind by Ollie Lawrence; a long diagonal by Owen Farrell and finally a Henry Slade grubber outside the 22 after one pass off a scrum.

Five different kicks from five different backs, and there were others which earned attacking set-pieces. Almost all were pre-planned. Having conceded two tries from attacking kicks in behind at Twickenham in February, Ireland don’t need reminding of this English tactic. Yes England were fortunate with the bounces, but as ever the chase was as good as the kick.

This perhaps partially explains why Keith Earls’s experience (85 caps) has been restored to help guide Hugo Keenan (three caps) and James Lowe (one). At least all three are playing in their specialist positions. England are not the opposition to play outside backs out of position, think of Robbie Henshaw at fullback in the Aviva Stadium last year. Or France, only a week later, employing a winger, Yoann Huget, at fullback and a centre, Gaël Fickou, on the wing, when Les Bleus were run ragged and lost 44-8. The French back three looked like they were chasing squirrels.

It’s not that England are especially creative, more there are so few apparent weaknesses, and they do everything so well, be it their scrum, their offensive and defensive lineout, their catch and drive, their breakdown work, their work in the collisions, their aggressive defence, and that kicking game. They also have oomph off the bench.

They also look likelier to deliver in all these areas. In terms of age profile, the two teams match up almost identically, with England’s matchday squad having an average age of 27.1 and Ireland 27.9. But in terms of caps England (832) are noticeably more experienced at Test level compared to Ireland (634). This is even truer of the starting XVs (725 as against 433).

Nowhere is the discrepancy more stark than at halfback, where pairing Jamison Gibson-Park with his Leinster team-mate Ross Byrne in the enforced absence of Johnny Sexton is a signal of intent to play a high tempo from the off. But the pair have 11 caps and just two starts. By comparison, Youngs and Farrell have a combined 192 caps, including the Lions, and a total of 155 Test starts.

Here and elsewhere, England have a more proven and settled look to them. Their World Cup final defeat has jarred them but in reverting to seven of the pack and 11 of the XV which beat the All Blacks in the World Cup semi-final, Jones also goes into this game with 10 of the starting line-up which was far from flattered by the 24-12 win over Ireland last February.

The five changes see Slade (who scored two tries at the Aviva Stadium a year previously) and Lawrence form a new midfield, while the Vunipolas are restored along with Joe Launchbury. No Tuilagi, but potentially even stronger.

This Irish team, retaining only five of the XV from that last meeting, looks more inventive, with cleverer strike plays, but also more of a work in progress, with less proven combinations, and they will likely be tested thoroughly and everywhere. It would be something else if they passed them all the tests with honours.

But reversing the recent trend of this rivalry, thereby generating genuine encouragement for next year’s Six Nations, and particularly the final examination next March in Dublin, would do for now.