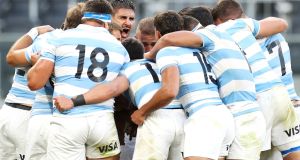 In devising a game plan to defeat the might of New Zealand, Argentina coach, Mario Ledesma, accepted that the Kiwis had more skill and pace than his Pumas.

So Ledesma went back to the foundations of rugby. He based the Pumas plans on bravery, physical confrontation and unyielding passion to frustrate New Zealand.

Ledesma had faith in his the character of his players. In return the Pumas not only bought into their coach’s plan, they internalised it. Their captain, Pablo Matera became a beacon for the plan and his team followed.

When the New Zealand hooker, Dane Coles, took a cheap shot and lightly slapped the face of Marcos Kremer, Matera physically raged. He grabbed Coles and lifted his back jersey past his ears while placing his nose on Coles forehead. Pablo’s body language roared as loud as his Spanish words that he was having none of that Kiwi rubbish.

At that moment the Pumas were no longer the victims of New Zealand bullying. Ledesma had inspired the warrior spirit to burn so fiercely in the hearts of his players that after the match their heroics reduced him to uncontrollable weeping.

The Pumas inspired the entire rugby world because they were fuelled by the most powerful of humanities intangibles, the indomitable spirit.

Ireland face a very similar problem to that of the Pumas. England have done a Dane Coles, and slapped Irish faces, three games in a row. Scoring 113 points to Ireland’s 47. Ireland have been out-thought, out-fought and outplayed.

Today England are at unbackable odds to win at Twickenham and with good reason. This is an exceptional English team. In my opinion, it is the best since 2003. They possess highly talented players who play with real aggression and are empowered by superior coaching tactics.

England’s tactics have their foundation in the knowledge that Eddie Jones has the current Irish game plan picked apart. He predicts all the Irish attacks will come off ‘10’. Sexton’s absence changes nothing for England. They will attack the Irish system, not the man.

The English mantra is to put pressure the Irish 10, Ross Byrne or Billy Burns - or Sexton for that matter - and force him to pass early, then hit whoever he passes to. It’s that simple.

In the last Six Nations match, England sent rushing defenders at Sexton, with Maro Itoje hanging out wider in the defensive line. His task was to race through and engulf the receiver of Sexton’s pass. Itoje caught Bundee Aki behind the gain line multiple times.

For Byrne and Burns there will be little time, lots of pressure and buckets of good old fashioned sledging.

To give Jones the credit he deserves, each of his last three game plans against Ireland have been masterclasses in tactical excellence. One of many examples is that in the last two Six Nations matches England have scored four tries from kicks. The variety and accuracy of the English kicking game has exposed Ireland’s frailties in the back field to the world. Last month, France took note and scored three tries from kicks against Ireland.

Astonishingly, the defensive structure of the Irish back three has remained unchanged. With George Ford returning to the bench and Owen Farrell starting, it appears that Jones’ kicking plan will once again terrorise the Irish backfield.

If you are thinking that all this paints a grim picture for Ireland, then you are right. But all may not be lost. A few weeks ago Australia were in a similar daunting situation. So they devised a bold tactical gameplan that defeated New Zealand.

Before the fourth Bledisloe test, Australia’s outhalf cupboard was so bare they were forced to select Reece Hodge, a winger, at 10. When the rugby world heard that news the consensus was that New Zealand would win by a cricket score. Sound familiar?

Yet with a winger at outhalf, the Wallabies fought and won a famous victory.

The tactics started the first time Hodge received the ball. The Wallabies had predicted that the Kiwis would rush at Hodge like a band of ancient Maori warriors. Thirty metres from the Kiwis try line, Hodge held his nerve and did the unthinkable.

His first act as an outhalf was to chip kick over the foaming mouths of the Kiwi defenders, into the vast space they left behind. A kind bounce and one pass later - with his first touch in international rugby - Tom Wright crossed over to score. The Wallabies then continually attacked the short side, nullifying the rushing defenders and with ferocious work at the rucks, they frustrated the Kiwis’ attack.

Wallaby coach Dave Rennie, a Kiwi, not only inspired the Wallabies to perform with huge courage against the nation of his birth, but he also used creative tactics to out think the New Zealanders.

Ireland must use tactics Jones has not predicted and place profound physically on the English to frustrate their plans. For all of that to happen is a long shot. What is sure is that if Ireland turn up at Twickenham and do what they have been doing, then they will get what they have been getting. And that is another belting.