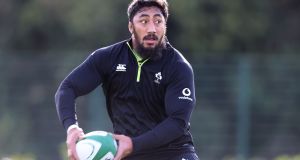 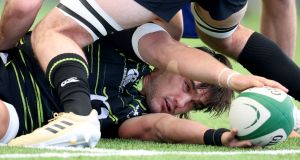 Quinn Roux put down a strong marker in the secondrow against Wales. Photograph: Dan Sheridan/Inpho 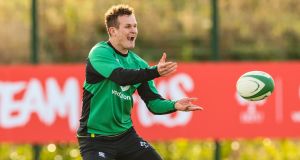 Billy Burns could start for Ireland against England on Saturday if he has fully recovered from his HIA. Photograph: Billy Stickland/Inpho

Decisions, decisions, decisions. In making seven changes last week for the Autumn Nations Cup opener against Wales, Andy Farrell said he wanted to see heightened competition for places. That much it did, so much so that Farrell and co have seemingly been left with options galore for Saturday’s trek to Twickenham (kick-off 3pm, live on RTÉ and Channel 4).

“Not all the boys last week were dropped you know,” Farrell reminded us in the immediate aftermath of the 32-9 win over Wales. “There was an element of giving people a chance and seeing whether they could handle a start or able to take a chance and grab hold of it, and I think plenty of them did. So that’s great for us going forward.

“Competition for places, as I keep on saying, is fundamentally key for this group going forward, not just in the autumn but in the Six Nations and in the years to come as well.”

Admittedly, options have since been reduced by the injuries to two players who would certainly have started, namely Johnny Sexton and Robbie Henshaw. In any event, Farrell and his coaches appear to have genuine decisions to make in every combination.

Take the back three. With his dynamic carrying, offloading and left boot, James Lowe’s smooth transition to Test rugby has surely cemented his place, while Hugo Keenan brought his work-rate and composure to fullback. It remains to be seen whether Jacob Stockdale has overcome his tight calf.

The midfield jinx having added Henshaw alongside Garry Ringrose on the casualty list, presumably too Bundee Aki returns after the jolt of missing out last week inside Chris Farrell.

One imagines Farrell’s reminder about players not being dropped could have Conor Murray in mind, and impressively high tempo though Jamison Gibson-Park set from the start, Murray’s experience could be more valuable if Billy Burns is set to make his full Test debut. Burns’ HIA could, however, cast a a question mark over his participation. Alternatively, Gibson-Park and Ross Byrne have more of an understanding.

About the only unit which looks reasonably safe to call is the frontrow. Maybe. Rónan Kelleher’s first start would have come sooner than last Friday but for injuries and he held his nerve but for the crooked throw when Ireland first went to the corner. He also brings a ball carrying dynamism which Ireland need.

Last Friday, after recently turning 30, something seemed to click in Quinn Roux. A late replacement for Iain Henderson, Roux’s performance illustrated what Joe Schmidt was saying when first bringing him to Leinster more than eight years ago.

Mike Ross said Roux was the strongest lock to pack down behind him, likening it to having a JCB at his rear. Andrew Porter enjoyed his best day at scrum time in an Irish shirt and it was striking to see him turn, wink and point at Roux after winning the first Irish scrum penalty. And the try-scoring Roux did plenty else too.

Admittedly, Mako Vunipola will be an altogether different proposition than Rhys Carre, as Porter knows full well from the Leinster-Saracens quarter-final in September. The memory of that game is also fresh enough for the Irish management, who are toying with the idea of reconverting Porter to loosehead one day, to seriously consider having Roux pack down behind Porter against Vunipola and the Saracens-infused English scrum. Against that, Iain Henderson has apparently been training this week and has a burgeoning partnership with James Ryan.

Like Porter, Caelan Doris and Will Connors will also have learned the lessons of ‘submarining’ at the back of the scrum in readying themselves for Billy Vunipola that day, as they’ve admitted since. Doris brought another dimension at number eight against Wales with his footwork and distribution which is worth retaining in that position, but it’s hard to sacrifice CJ Stander’s relentless work-rate and jackaling.

Then again, Peter O’Mahony responded like the quality player he is to being left on the bench in the previous two games and he still brings lineout skills which no other Irish backrower possesses, as well as some Munster dog.