France make eight changes for the tricky visit to Murrayfield 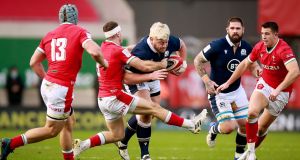 Scotland’s Oli Kebble is tackled by Gareth Davies of Wales. Kebble gets a first start as he links up with hooker Fraser Brown and Simon Berghan for the game against France. Photograph: Tommy Dickson/Inpho

Gregor Townsend insists silverware will be Scotland’s main driving force this weekend rather than the chance to equal a feat last achieved by the nation’s Grand Slam heroes.

The Dark Blues welcome France to Murrayfield on Sunday looking to make it six wins in a row for only the third time in the nation’s modern rugby history.

The last Scottish sides to rack up a similar winning streak were the classes of 1925 and 1990 – who both completed clean sweeps of the Five Nations as part of their record-setting runs.

But Townsend – whose team have beaten Italy (twice), France, Georgia and Wales on their current hot-streak – would prefer to see his team rewarded with something tangible in the shape of the Autumn Nations Cup rather than a place in the record books.

This weekend’s clash against Les Bleus is is effectively a semi-final now that Pool B rivals Fiji have had all three group games – including next week’s clash with the Scots – cancelled following a Covid outbreak, Townsend’s team sit on the verge of playing for a trophy if they can muster a repeat of March’s victory over Fabien Galthie’s team.

“The opportunity is about winning this game and what that would mean to this group in terms of getting into the final to play for first or second in a couple of weeks’ time,” he said.

“We know what a challenge France are going to bring – one of the best teams, if not the best team, in the world right now, so that’s all we’re thinking about.”

Townsend has made five changes to Scotland’s starting line-up from last week’s win over Italy.

Four of the changes come in the pack with a new front row with South African-born Oli Kebble getting a first start as he links up with hooker Fraser Brown and Simon Berghan. Matt Fagerson returns to the back of the pack after an ankle injury.

In the backs, Blair Kinghorn takes the place of Darcy Graham on the wing.

France coach Galthie has made eight changes to the team that beat Ireland in the Six Nations. Matthieu Jalibert comes in at outhalf in the absence of the injured Romain Ntamack, alongside scrumhalf Antoine Dupont, while Thomas Ramos, who will be on kicking duty, is in for the injured Anthony Bouthier at fullback.

Following an agreement between the French federation and the league, each player can be named on no more than three teamsheets during the November-December period, and Galthie has decided to bring in some of his usual replacements – or ‘finishers’ as he calls them – for the trip to Scotland.

The front row has been completely revamped, with Jean-Baptiste Gros, Camille Chat and Demba Bamba starting in place of Cyril Baille, Julien Marchand and Mohamed Haouas.

Dylan Cretin will start in the second row following Francois Cros’s injury, while Gael Fickou is back at centre alongside Virimi Vakatawa after winger Teddy Thomas came back from injury.