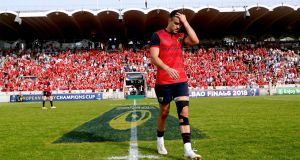 Munster’s seasons are defined by their exploits in Europe.

Since their run to the 2000 final, it’s been ever thus. Their Holy Grail. Their Magnificent Obsession. Come a big week in Europe, the province comes alive. If at home, Thomond Park becomes a citadel. If abroad, the Red Army pitches up. But there’s a flip side.

The Heineken Cup final wins in 2006 and 2008 led to unbridled celebrations, as have many other one-off wins along the way, but each deflating European exit seems to leave a hangover when Munster return to domestic matters.

Admittedly, in 2011, they recovered from their first pool exit since 1998 to reach the league play-offs, and a week after Leinster’s momentous comeback win over Northampton, Munster were lurking in the Thomond Park long grass and wildly celebrated their 19-9 win in the final.

It was their fourth trophy in a golden six year period. Since then though, Munster haven’t won any silverware.

That was Conor Murray’s breakthrough campaign. He didn’t make his first start until that March, but Tony McGahan chose him to start nine of Munster’s last ten games, ahead of Peter Stringer and Tomás O’Leary; culminating in the final.

“I’ve unbelievable memories from my first year with Munster. I was obviously a newcomer to the squad. This squad now a lot of my close mates are playing and that would make it really special to win something, because you’ve gone through a lot of heartache with them over the last few years. Not that you ever ‘deserve’ it but we have the ability to be a trophy-winning team. So that’s where our hunger is now, to try and do it, and it would mean an awful lot.”

David Wallace was man-of-the-match in his 200th Munster game in that 2011 final and although he would play three more matches the following season, likes to think of it as his final outing for his province.

“It’s a massive memory for me. It was my last full game ever. It was great to win that, and by beating Leinster, who had just won the European Cup, although they’ll argue that their eyes were off the prize. I had my family there. My boys (Andrew and Harvey) came on to the field, Julie Rose wasn’t born there, and I had my picture taken with them. Yeah, it was lovely. I think back and I’m happy to have those moments.”

As for the Pro14 being the poorer relation, Wallace says: “It doesn’t compete in terms of European prestige, but I think it is getting better. When you factor in that three of the four semi-finalists in the European Cup are Pro14 teams, the actual standard of the competition is very undervalued.

“For momentum going in to next year, it would be brilliant to have some silverware for this squad, which is very young really. I don’t think there’s any retirees or near retirees this year. Billy Holland, who’s 31, is the eldest in the squad and I’d say internally it will be a massive goal. Maybe less so in the eyes of the public but I think that perception will change.

“I would say the Pro14 is a good bit ahead of the Premiership now, and is on a par with the Top 14. We have to value it more and I think definitely it’s very important for Munster to win it.”

Whereas Murray would go on to play in the 2011 World Cup, Wallace suffered a bad knee injury in a warm-up game against England, and his last of three matches in 2011-12 was as a late replacement in the European Cup quarter-final defeat at home to Ulster.

Five weeks later Munster played the Ospreys away in the league semi-final and, in Tony McGahan’s last game, were thrashed 45-10.

In 2014-15, they recovered from a rare Euro pool exit by reaching the Pro12 final, only to be thrashed 31-13 by Glasgow in Belfast. Another pool exit followed a year later, when only bonus point wins at home to Edinburgh and the Ospreys secured European Cup qualification again.

Last season Munster memorably plotted a route to the Champions Cup semi-finals again, but came up short against Saracens at the Aviva Stadium. Five weeks later they were beaten 46-22 by the Scarlets at the same venue in the Pro12 final.

Throw in the Champions Cup semi-final defeat to Racing a fortnight ago, and since 2011 Munster have lost one quarter-final (in Europe), six semi-finals (four in Europe) and two finals (both in the Pro12).

Such consistency is to be admired. There have been many fine performances, including three quarter-final wins in Europe and a couple of Pro12 semi-final wins.

However, nine defeats in 14 knock-out games over the last seven seasons has left plenty of rocks under their towels and some mental baggage. No wonder Peter O’Mahony admitted after the Racing defeat: “I am tired of losing semi-finals.”

Looking on from the outside, Wallace maintains: “I don’t know if it would be a monkey off their backs. A lot has happened in those years. There’s been a lot of transition, and the graph is very much on the right track.”

Citing Saracens knock-out defeats in Europe in the years leading up to their two triumphs, he adds: “Even us losing those semi-finals and finals before we won it, you need to go through those painful defeats to motivate yourself to get better. It’s part of the maturing and hardening of a squad. You wouldn’t look at them as negatives, but as real learning experiences. I think they’ll use that pain and those losses to improve as a squad.”

Nonetheless, a patently frustrated Murray was first off the pitch in the Stade Chaban Delmas a fortnight ago to be on his own with his thoughts in the dressing-room. A defeat has rarely seemed to hurt him so much. Given the province’s Euro-accentuated mentality, he admits there is a possibility of another hangover.

“Yeah, there is. That’s completely natural because what you said is true. We put a lot of pressure on getting into a European final and winning that, so it’s probably down to an individual thing – how you deal with it yourself and how you pitch up on Saturday. Johann [van Graan]) and the coaching staff have gone through it, we’ve reviewed the game, we’ve looked at why we lost it, we’ve trained in the areas we thought we were weak and tried to fix that. He’s got the team in a good place.

“But I’d be lying if I told you I didn’t think about the Racing game quite a bit since then, and still am thinking about it. So it’s about how you manage it yourself. It’s a natural thing that you have to go through and pitch up.

“But it would be worse if the Racing game was your last game of the season, and you didn’t have a chance to play a game, play well and begin to get over it. That’s the beauty of where we are this season. We have a chance to win a quarter final and get back into good form and good spirits – which we are. We’ve gotten over it pretty well. We’re all mature enough to know how to get over these things.

“Europe is obviously number one, there’s never any hiding that with Munster, but to win a trophy would be brilliant for us as a group. I think we’re a squad that’s very close to it, with what we’ve done in the last few years, with the European semi-finals, the final of the Pro12 final. It’s a squad that’s very close to doing something, so you’ve got to dust yourselves off and try to do it.”

Now with their fifth different head coach since that 2011 triumph, lifting a trophy would imbue the Munster organisation with renewed belief for next season. For example, Glasgow and the Scarlets winning those Pro12 titles were the springboard for much improved showings in Europe in the ensuing seasons.

“In a way we probably need it because if we go another year without a trophy it just builds that pressure again, and that’s just the cold facts of it,” admits Murray.

“That’s in the background but from the Racing game to now all we want to do is perform this Saturday, and with respect to Edinburgh who are on an unbelievable run, eight of nine games, beating all the Irish provinces etc. They’re a force to be reckoned with, but we want to show everyone how we can perform, and get rid of that Racing game, and then we can start to build again. Yeah, to end with a trophy would take a bit of heat off.”

Akin to 2011, were Munster to beat Edinburgh today, they’d be lurking in the long grass at the RDS a week after Leinster play in a European Cup final. As that final showed, it can be very difficult for a team to refocus a week after scaling those heights. So although today is only a quarter-final, Munster have a real shot at a first trophy in seven years here. And they need it.