Robbie Diack to leave Ulster and return to South Africa 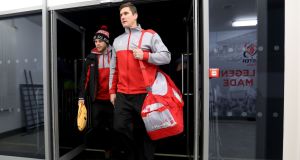 Ulster’s Robbie Diack is to depart the province at the end of the current season. Photograph: Bryan Keane/Inpho

Ulster backrow forward Robbie Diack has announced his intention to return to South Africa at the end of the current season.

After leaving his homeland in 2008, at the age of 22, Robbie made his Ulster debut in September of that year against Scarlets.

In October 2017, he became the first person born outside of Ulster to make 200 appearances for the province, and he is currently the sixth most-capped player with 205 caps to his name.

He also earned two full international caps for Ireland, his adopted country, in 2014.

Now, a decade since his arrival in Belfast, Diack has decided that the time is right to return home:

“When I first came to Ulster in 2008 I had signed a three-year contract and I never imagined that 10 years down the line I’d still be here. Of course I’m very sad to be leaving Ulster, but we feel the time has now come for my family and me to return to South Africa to be closer to family and friends.

“I’ll be forever grateful for the opportunities that I’ve had and the memories that I’ve made here, and I’m thankful to the people who have supported me along the way.

“While we have quite a few things to keep us occupied in South Africa, I feel that I still have a lot to offer as a professional rugby player. I will be assessing several options on and off the rugby field over the forthcoming months.”

“Since the moment he arrived, Robbie embraced everything that the province stands for. He quickly established himself as an important member of the Ulster squad, and to have played so many games is testament to his quality, consistency and versatility.

“Robbie has been an outstanding servant to Ulster Rugby and will be missed by staff, players and fans alike. He has been an absolute pleasure to work alongside and we wish him, Kirsty and Fletcher well on their return to South Africa.”