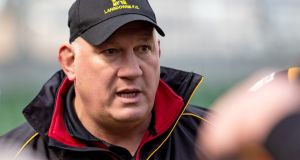 Mike Ruddock: “It’s going to come down to a massive effort again on Sunday against an excellent team who know how to win.” Photograph: Laszlo Geczo/Inpho

Lansdowne go into Sunday’s Ulster Bank League final at the Aviva Stadium as the warmest of favourites to win a third title in Mike Ruddock’s seven years thus far as coach.

But the former Wales Grand Slam-winning coach acknowledges that Cork Constitution, five time champions, have trophy-gathering in their DNA.

Lansdowne finished ten points clear of the pack in Division 1A, having won 16 of 18 matches, which included a 24-10 win over Sunday’s opponents on their all-weather back pitch at the Aviva. But one of their two defeats was to Con, 25-13, at Temple Hill in March.

That said, Lansdowne also beat Con in the Bateman Cup final three weeks ago, thus ending the Cork club’s five-year hold on that trophy, and the Dublin club are thus seeking a double of their own after Con achieved the feat last year when beating Clontarf in a superb final.

Playing down the pressure that comes with favouritism, Ruddock described this campaign as “a different year” and added: “We finished top of the league a couple of previous times and won it so swings and roundabouts, you never know do you?

“It’s going to come down to a massive effort again on Sunday against an excellent team, who know how to win in fairness. Bateman Cup champions five times and did the double last year, and just came up to Dublin and won last weekend so a lot of nous about that team.”

“They know how to win those big games so that’s why it’s pleasing we went down to Cork and got that result down there. That gives us a lot of confidence coming into the game but a huge amount of respect as well.

As well as a welcoming post for former professionals such as the former Con and Munster outhalf Scott Deasy, of whom Ruddock said “he’s really immersed himself in the club and becoming a genuine leader and a fantastic player for us”, Lansdowne have also been a springboard to the pro ranks for other players.

Sunday is also a day in the shop window for the players involved, and citing the examples of Matt Healy, Craig Ronaldson, Tom Farrell and Tom Daly, Ruddock said: “If players ask us about the club, we can say ‘well, this guy was in the pro ranks. He became the best player in his position in the league, gets a pro contract and ends up playing for Ireland. Gets capped by Ireland.’

As to whether other players in the current squad might follow suit, Ruddock said: “I’ll tell you after Sunday! Let’s put them on the big stage, and see if they deliver. There are guys that are capable, I think, in principle. Definitely.”

“I’ve got to tell you this, I talk to a lot of people and they’re a little bit dismissive, possibly, of this standard, but I see guys that are in the gym at seven, eight o’clock in the morning before they go to work; lifting weights, following programmes. I see guys coming into the gym straight after work, training. Guys eating the right things.

“We’ve got a nutritionist who works with the club. He doesn’t work with me, as you can see. I’ve kept him at arm’s length! We’ve got a conditioner at the club. We’ve got a video performance analyst at the club. We’re constantly updating stuff. Giving guys personal stuff on WhatsApp, for example, on how to improve their game.

“I’ve got to tell you, I admire these guys. In the pro set-up, it’s fantastic and they get all the ‘supports’ that you would expect with professional rugby. But in fairness to the club, we provide quite a lot of support to the guys. But . . . they put a lot of work in as well. It really is impressive.”

In all of these support structures, Zurich have remained the club’s main sponsor since the inception of the league. They are also set to extend that sponsorship into 30 seasons after recently agreeing another two-year deal.

“We spoke to them about a partnership sponsorship 25 years ago and it really is a partnership. They use the pavilion for corporate meetings, or staff meetings, and they are very much active sponsors.”

While Ruddock seemed confident that the Leinster prop Peter Dooley will be available after being on the bench for the Leinster ‘A’ team, he’s unsure whether Daly will be involved in Sunday’s final, or Charlie Rock, other members of the Leinster ‘A’ squad who are contesting the final of the British & Irish Cup the following weekend.

“They’ve got a decision to make. There is a B&I Cup final the week after. It’s a quick turnaround on that. I think it could be a Friday game so Sunday for us. I’m just waiting on a bit more information on that.”

Asked if he would be happy to see back of the B&I Cup, Ruddock laughed and joked: “I haven’t seen the front of it yet! Is there a cup there?”