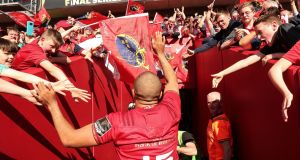 Johann van Graan admitted Simon Zebo will be missed after signed off his Thomond Park farewell with a trademark piece of individualistic skill to set up Keith Earls for the match-winning try.

Munster’s 20-16 Pro14 playoff win over Edinburgh sets up a semi-final against Leinster at the RDS, thus ensuring an Irish team will be in the final.

“Very much so. I said to the team inside, since I came, the thing we will miss most is his smile and his attitude. He’s his own man and such a fantastic Munster man.

“He was part of a back three that played really well today, I thought the back three as a unit really did well, but there was one or two moments from Zeebs. Firstly, to see that chip and that pass was pretty special. We’re going to miss him as a Munster man.”

The Munster captain Peter O’Mahony added: “What he has is something that I think you’re born with or you can’t really be taught, that kind of killer instinct. It’s certainly hard to replace. I’ve played a lot of rugby with him and he brings that little bit extra, that little bit of something special and you saw that today.

“The performances he can put in, the little magic moments where the game is as good as a stalemate and he makes the difference. He’s a special player.”

The opposing Edinburgh fullback, Blair Kinghorn, admitted: “It was a great piece of skill that he pulled off. He’s a quality player and that’s why he’s playing at high levels. He worked it well and it was a great try in the corner.”