How much will it cost you to watch rugby on TV next season?

TG4 will broadcast 34 matches per season, but will not include Munster and Leinster derbies 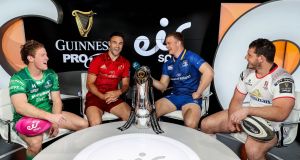 Eir Sport has agreed a television rights deal to broadcast 152 Pro 14 matches a season to subscribers in the Republic of Ireland, with six live games every weekend in a 30-hour weekly commitment that will include pre- and post-match analysis and a weekly highlights show to preview and review each round of games. They will transmit every Munster and Leinster game live.

This complements other elements of its rugby package that includes the exclusive rights to the 2019 Rugby World Cup in Japan and from next season will be the primary platform to watch the European Champions Cup and the European Challenge Cup through the BT Sport platform, the U-20 World Championships in France in June, as well as its existing coverage of schools rugby.

In Britain and Northern Ireland, Premier Sports (£9.99 a month) will broadcast every game in the Pro 14 for the next three years, while sister channel FreeSports will show one live match free-to-air per weekend.

TG4 will also broadcast about 34 matches per season, but will not include Munster and Leinster derbies as they will be shown exclusively on Eir Sport.

With the landscape now changing again in terms of who shows what, the challenge for rugby supporters during the summer is to try to work out the most convenient and cost-effective way to follow rugby in time for the start of next season.

So, starting with Eir Sport, what’s on offer?

What happens if I don’t qualify under any of those criteria?

You can subscribe to the Eir Sport pack if you are a Sky TV (€245 annual fee) or Vodafone TV customer without Eir broadband. Eir Sport is not available on the Virgin platform, although one suspects that will change unless Virgin is willing to risk a sizeable migration by rugby fans to rival providers.

Eir has four bundles and the Eir Sport pack is free with each. Offers include Eir broadband & landline for €40 a month on a 12-month contract. The deluxe package includes broadband, landline, mobile & TV at €50 a month for the first 12 months rising to €106 a month for the remaining 12 months on a 24-month contract. As in the case of the first offer, adding Sky Sports to the bundle comes at an extra cost.

Slim pickings is the short answer. The marginally longer one is that they have the rights to Ireland’s three-test summer tour to Australia that takes place next month. Sky TV and Sky Sports is currently available at €54.50 for the first six months, with the Sky Sports package rising to €69.50 per month thereafter. Sky TV customers who don’t have Eir broadband will have to shell out another €27.50 a month or €245 annually for the Eir Sport pack.

What about the Virgin media platform?

Well, the Virgin Mix TV package and a Sky Sports subscription costs €70 per month. Virgin customers currently have no access to the Eir Sport package.

TV3, ITV and the BBC still have the Six Nations Championship, while TV3 and Channel 4 have at least one live match each weekend in the European Champions through the six rounds of pool matches, one quarter-final, one semi-final and the finals. RTÉ still retain the rights to Ireland’s matches in the November test series, the under-20s and women’s internationals in the Six Nations and the Ulster Bank League Division 1A and Bateman Cup finals.

Anything else of note?

Well, the kick-off Pro 14 final on Saturday, May 26th, at the Aviva stadium was slated to start at 6.30pm. However, to avoid a clash with soccer’s Champions League final (7.45pm) discussions are at an advanced stage with Sky Sports to bring forward the kick-off time in the rugby match so fans can watch both without any overlap.

1 Trump endorsement by Jack Nicklaus leads to avalanche of dismay
2 Ireland fall short against France as England win Six Nations title
3 World Handicap System: What is it? How does it work? Will my handicap change?
4 Jota forgets penalty miss to steer Liverpool past West Ham
5 Galway expose Wexford’s lack of Plan B to reach Leinster final
Real news has value SUBSCRIBE