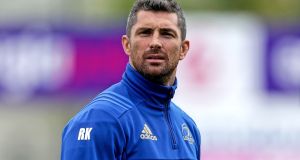 Rob Kearney would like to extend his contract beyond 2019. Photograph: Laszlo Geczo/Inpho

Rob Kearney has almost escaped the clutches of preseason purgatory. Four weeks in since returning from a summer break, the end of the hardscrabble fitness quest is in sight, potentially within the next fortnight.

A return date to the match environment in the blue of Leinster is pencilled in for round two or three of the Guinness Pro14. The fact that it is within touching distance makes the final push a little more bearable.

The 32-year-old fullback enjoyed a brilliant season for Leinster and Ireland, unshackled from injury constraints, and one that yielded a Champions Cup victory, a Pro14 title, a Grand Slam and a test series win in Australia. The challenge is to try and replicate that success and then throw in for good measure a World Cup in Japan next year.

Leinster is Kearney’s first port of call from a playing perspective and there is a familiar face facilitating the province’s desire to keep moving forward. Felipe Contepomi, the player, has morphed into a coach. Speaking at the launch of Leinster’s five-year deal with BearingPoint, a management and technology consultancy, Kearney outlines the impact that Contepomi has already enjoyed on the province’s attacking philosophy;

“It’s like he never left. The thing that he’s focusing a huge amount on is our first phase. It’s probably an area in which we didn’t score enough tries off last year, so he has put a real onus on scoring more tries off the first two or three phases of set piece.

“We are very much going back to the basics of rugby so we are working on our passing, staying square, running in the channels, making sure that we are not blowing too many overlaps; three-on-twos, four-on-threes. He has scaled it right back to simplistic terms, very much like Joe (Schmidt) did in his early years with Leinster. I am a big believer that that is an area of the game that you can never do enough on.”

Contepomi is less gung-ho as a coach from the free spirit, run-from-anywhere presence of his playing days as an outhalf although Kearney did point out, “he (Contepomi) has still has that real excitement for attacking (rugby) and giving players licence to play from anywhere across the field.”

The Argentine has championed the preservation of space on the inside to create room to attack in the wider channels, an emphasis with obvious appeal for a fullback. “As soon as the guys inside are running sideways you have no space. The more that we can work on that, throwing wider balls into those 15-metre channels where you are working against softer defences, (then) it is much (a) easier and more enjoyable place to attack from as opposed trying to (bash through).

“We have done a lot of defensive work; we leaked too many tries last year,” the concession from driving mauls in the 22, a particular concern. Kearney continued: “We have put together a lot of work on that and also in trying to enhance our attack play too. Our phase play was very good last year but we want to improve the work that we do off set piece. That’s another work on.”

Kearney’s contract is due for renewal in November of next year. All things being equal he’d like to play on. “There is no end on sight yet. When I was younger I always wanted to make sure that I would enjoy the last few years of my career. Two years ago if you had asked me, the body was starting to give up and I would have said that the World Cup (2019) and I’ll be done. But if this season goes as well as last year went and body and mind are still in a good place I will certainly be looking to play on.”

He admitted that the respite from the negative conjecture regarding his presence as Irish and Leinster fullback last season was a welcome relief. “It was really nice for a change. You never own a jersey, you borrow it for a weekend effectively, especially coming into Leinster now and the squad of players we have; 54 players played last season.

“A lot of players wear that jersey so when you do get it there is more pressure on you to do it justice. Last year for me was particularly pleasing because I played so many games, was injury free and got a great run. When you are fit and getting a run of game your form is going to pick up too: more of the same would be nice.”

From a national team perspective he admitted that beating a southern hemisphere team in their backyard was a positive benchmark on the road to Japan but that while the World Cup is in the back of every player’s mind it’s more of an abstract focus, superseded by the short term concerns of playing matches, irrespective of the colour of the jersey. It can’t be anything else.