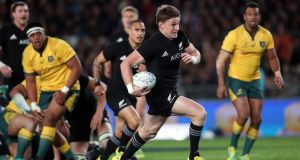 New Zealand outhalf Beauden Barrett runs away from the Australia defence ato score one of his four tries during the Rugby Championship match at Eden Park in Auckland . Photograph: Michael Bradley/AFP/Getty Images

Beauden Barrett scored a record four tries as the All Blacks withstood a tense first half before running away with the second in a 40-12 victory over Australia at Eden Park on Saturday as the hosts retained the Bledisloe Cup with a Test to spare.

Prop Joe Moody and loose forward Liam Squire also crossed in the Rugby Championship clash for the world champions, who have now held the Bledisloe Cup since 2003. The third match in the series takes place in Yokohama, Japan on October 27th.

Scrumhalf Will Genia and centre Reece Hodge scored for the Wallabies, who, similar to last week’s 38-13 defeat in Sydney, were competitive until half-time when the score was 14-7 before the All Blacks accelerated away after the interval.

Barrett’s four tries is a new All Blacks record in a match against Australia and he almost added a fifth when he touched down in the corner, but it was ruled out by the television match official for a knock-on by Ardie Savea earlier in the movement.

The outhalf’s haul eclipsed those of Frank Mitchinson (1907), Tom Lynch (1913) and Henry Taylor (1914), who all scored three tries for the All Blacks in a single Test against Australia.

“We respect this cup and respect what the Wallabies bring every week when we play them,” All Blacks captain Kieran Read said of retaining the trophy.

“It doesn’t come easy for us, we have to work hard and the boys have to really put the effort in. We’re very happy to have that cup.”

As was the case in Sydney, the Wallabies were competitive in the first half and had looked to go into the half-time break locked at 7-7 until Barrett finished off a sweeping counter attack for his second try to give the hosts a seven-point lead.

The All Blacks, however, raised both their intensity and pace in the second half with Moody and Squire crashing over after the All Blacks had sent player after player smashing into defenders and recycling the ball at speed.

Hodge’s try came from an excellent scrum by his forwards, with Bernard Foley scooting to the blindside and getting outside scrumhalf Aaron Smith to give his centre a clear run to the line.

The All Blacks, however, again exploited a tiring Wallabies side with Barrett adding two more tries, his final five-pointer coming from another counter attack sparked by Damian McKenzie and Ben Smith deep inside their own territory.

“Congrats to Kieran and his team they again proved they can just keep putting the pressure on the entire game,” Wallabies captain Michael Hooper said.

“I have got full belief in our team and our players. Something is not going right at the moment in certain parts of our game that we have to nut out.

“But I am a firm believer in this team and have full confidence we can turn the corner.”

Replacements: O Tu’ungafasi for Franks (52 mins); A Savea for Kane (53); K Tuinukuafe for Moody, S Barrett for Squire, N Harris for Taylor (both 56); TJ Perenara for A Smith, A Liernert-Brown for Goodhue (both 63 mins); D McKenzie for J Barrett (67),