Connacht the only Irish winners as Munster and Ulster beaten 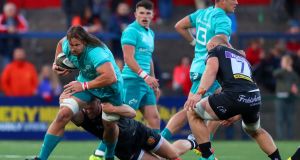 With nine internationals in the starting line up, Exeter Chiefs produced just enough to continue a pre-season winning streak in this hotly disputed clash with Munster at Musgrave Park as they ran out 12-0 winners.

In the first of three games between the sides this season, Exeter earned bragging rights in advance of the Champions Cup when they won this game through a combination of opportunism and defiant defence when required.

It was a useful exercise for both teams, Exeter in less experimental mode than Munster as the sides prepare for bigger games to come, the English side taking on Leicester Tigers in the Premiership and Munster playing the Cheetahs in the Pro 14 first up in competition.

Munster didn’t help themselves in the opening quarter by which time the visitors established a winning 12-0 lead, tries from the impressive Olly Woodburn and prop Harry Williams, with a conversion from Gareth Steenson, guiding them to that advantage.

Exeter made much better use of the ball during that spell, indeed they did throughout the opening half when Munster coughed up possession through unforced errors far too often for their own good.

If there was a plus on the Munster side it came via a well orchestrated defence. Yes, they conceded those well worked Exeter tries, but they also stood strong to keep the deficit down to manageable proportions.

And certainly they had no intention of allowing Exeter to pull away. Munster’s third quarter was by far their best and they put the squeeze on the visitors for the first time in the game with a prolonged spell on the attack.

All credit to Exeter for surviving the best that Munster could throw at them, the home side forcing several penalties and looking far more composed than they had in the first half in several attacking scrums, substitute Arno Botha providing the visitors with plenty to worry about.

Still, that Exeter defence held firm, but only just when Darren Sweetnam’s brilliant run was stopped just inches from the line at the three-quarter stage. Substitute winger Liam Coombes was another to come close when he was scythed down a couple of yards out after 64 minutes and you sensed it wasn’t about to be Munster’s night.

Connacht continued their excellent pre-season with a third win in a row since Andy Friend took charge as a star-studded Bristol side were beaten 14-12.

Connacht enjoyed the greater possession in the opening half but still went in trailing 5-0 at the break.

This was the final preparation match for both teams with Friend’s Connacht taking on Glasgow Warriors next weekend while Pat Lam’s Bristol open with a huge derby clash with Bath.

It was a useful workout for both sides at Ashton Gate on a rainy evening in Bristol in front of a small crowd. Bristol are the big spenders in the Premiership this season but the difference in budget wasn’t apparent during the opening half.

Connacht did the early pressing with centres Kyle Godwin and Tom Farrell impressing but Bristol’s defence was good. Bristol made their first attack count with fullback Luke Daniels, signed after impressing for Ealing Trailfinders against Lam’s men in February, crossing after 15 minutes.

Ian Madigan was unable to land the conversion from the left.

The second-half was a more fluid affair with Matt Healy sliding over for a fine try in the left corner after 45 minutes which was superbly converted by Jack Carty.

Academy product Andy Uren hit back for Bristol with Madigan converting to lead 12-17 after 51 minutes but good pressure by Friend’s men produced a first ever Connacht try for promising flanker Paul Boyle after a tapped penalty. Craig Ronaldson converted to make it 14-12 to Connacht.

Bristol, who lost their major summer signing Charles Piutau to a worrying shoulder injury, fought back but couldn’t find a way through a disciplined Connacht defence.

At the Ricoh Arena, Ulster were easily swept aside in their final pre-season friendly by Wasps as the English Premiership side scored five tries to triumph 31-14.

Wasps’ number eight Nathan Hughes scored a hat-trick while Ulster’s only points came in the second half through a 59th minute Nick Timoney try and then a last minute effort from Angus Kernohan with both converted by Johnny McPhillips.

For Ulster, Marcell Coetzee’s first game back in just under a year only lasted half an hour as the Springbok was yellow-carded and then didn’t return to the field and was replaced by Greg Jones.

Wasps led 19-0 at the turnaround thanks to a brace of tries from Hughes and one scored by Nizaam Carr with Billy Searle converting two from three attempts. Zurabi Zhvania then crossed early in the second half before Hughes bagged his hat-trick three minutes after the hour.

The province now head towards next Saturday’s Pro 14 opener at home to the Scarlets having lost both their pre-season hit-outs having also been turned over by Gloucester in Belfast last week.