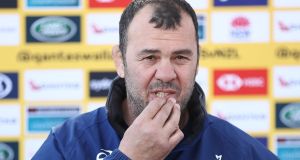 Wallabies coach Michael Cheika has Rugby Australia’s backing through to next year’s Rugby World Cup despite disappointing performances against the All Blacks, the governing body’s CEO Raelene Castle has said.

Back-to-back thrashings by the All Blacks in the opening rounds of the Rugby Championship have heaped pressure on Cheika, with media pundits calling for him to be sacked a year out from the global showpiece in Japan.

However, Castle said Cheika had the board’s backing.

“(They were) disappointing performances, no doubt,” Castle said on Tuesday.

“And everyone recognises that -- that’s not how we want the Wallaby jersey to be perceived at all.

“He is contracted through to the World Cup and he has a plan -- we are across that plan and we are comfortable with it.

“But clearly you can’t just ignore the performances - they’re not acceptable.”

The Wallabies were routed 38-13 in the opener in Sydney and 40-12 in Auckland on Saturday to lose the Bledisloe Cup, the annual series contested by the trans-Tasman nations, with a match to spare.

Shipping six tries in each match, the Wallabies also battled set-piece problems and committed a slew of turnovers as they were blitzed on the counter-attack.

Australia next host South Africa in Brisbane on Sept. 8 before Argentina a week later, and Castle said RA were “talking to” Cheika about getting support to turn the team around.

She singled out the team’s leaky defence, which conceded a total of 78 points in the two All Blacks matches.

“We now go into two test matches against South Africa and Argentina and that’s a really good opportunity for us to see the Wallabies in a winning environment,” she said.

“There are parts of our game that haven’t performed - particularly around defence.

“So we will be having conversations around that.

“But I don’t think it’s about changing what we’ve got. It’s about what else can we bring.”