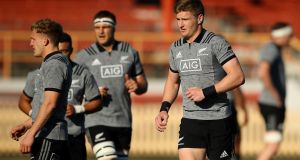 Jordie Barrett (right) comes in to the New Zealand side at fullback for Saturday’s match against Australia at Eden Park in Auckland. Photograph: Cameron Spencer/Getty Images

Jordie Barrett and Ngani Laumape have been called into an otherwise unchanged All Blacks starting side for their second match of the Rugby Championship against Australia in Auckland on Saturday (8.35am Irish time).

The All Blacks will also celebrate their second centurion in a week with tighthead prop Owen Franks set to earn his 100th cap. Lock Sam Whitelock brought up the milestone last week.

Laumape, who was only in the extended squad as injury cover for Sonny Bill Williams, replaced Ryan Crotty at centre while fullback Ben Smith has shifted to the right wing with Barrett taking over at fullback.

Crotty suffered his sixth concussion in under two years last week in Sydney while Ioane damaged his hamstring in New Zealand’s 38-13 victory at the Olympic Stadium.

The All Blacks can seal the Bledisloe Cup with victory at Eden Park, where they have not lost to Australia since 1986. They have held the symbol of trans-Tasman supremacy since winning it back from the Wallabies in 2003.

“The team is fully aware that it has the opportunity to close out the Bledisloe Cup series on Saturday,” coach Steve Hansen said.

“In saying that, we know that there’ll be a massive response from Australia following their performance last week.”

The only other change to the side from last week’s victory is on the bench with prop Ofa Tuungafasi returning from a rib injury.

Tuungafasi was originally named in the side last week but withdrawn later and replaced by Tim Perry, who made his Test debut off the bench.

Franks, who made his Test debut in 2009 and is the ninth player to earn 100 All Blacks caps, was praised by Hansen.

“Whilst last week was a special occasion for Sammy Whitelock, this week it’s Owie’s turn to join that special club,” Hansen said.

“He has started 90 of his 99 Tests to date, which is an incredible achievement for a tighthead prop, one of the most physically demanding positions on the footy field.

“His professionalism and dedication to improvement has been an inspiration to other All Blacks for quite some time.”