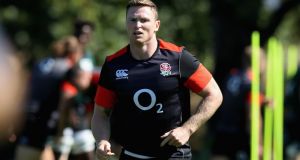 Chris Ashton’s tentative England comeback has already stalled after he was given a seven-week ban for a tip-tackle made during Sale’s pre-season friendly against Castres last Friday.

Ashton was sent off for the incident involving Rory Kockott, who was also shown a red card, and an independent disciplinary hearing held at Twickenham on Thursday afternoon found him guilty despite the charge being contested.

Speaking at the launch of the new Premiership season before the hearing had started, Sale boss Steve Diamond insisted Ashton’s action was fully justified as it was in “self defence” amid suggestions of eye-gouging.

The suspension means the 31-year-old will miss the first six games of Sale’s league season and England’s training camp in Bristol in late September, robbing him of precious opportunity to impress Eddie Jones.

It is a significant setback that comes in the wake of leaving Toulon for Manchester in order to add to his 39 caps, the last of which was won in 2014, and amid early success in his quest by being picked in Jones’s pre-season training squad.

“It is an important principle of rugby regulation to prevent injury to others,” the hearing’s chairman Richard Whittam said.

“Provocation is not a defence to foul play and lifting a player and dropping that player such that his head makes contact with the ground has the potential to cause serious injury.”

Counting against Ashton at the hearing was the total of 23 weeks he missed in 2016 after being found guilty of biting and making contact with the eye area of an opponent, resulting in an extra week being added to the entry points sanction for the offence of six weeks.

Diamond, however, refused to condemn his marquee signing who must wait until the Challenge Cup clash with Perpignan on October 12th to make his debut.

“I’m pissed off that he got sent off, but it was in extreme circumstances where he defended himself,” Diamond said.

“I’d take a red card for any other Sale player if they defended themselves the way Chris Ashton did.

“If you’re defending yourself on a rugby pitch when things go on and are over and above what we expect then red mist doesn’t come into it.

“It was self-defence I would say. Chris Ashton defended himself as any of you lot would defend yourself.”

Sale claim they were the victims of repeated illegal play by Castres in a 20-17 win in Saint Affrique and while Diamond has been left to deal with the fallout, his only response will be to “not go again”.

“I’ve got seven people unfit to train this week because of it. Brutal. Violence against Sale from Castres,” Diamond said.

“Three red cards, three yellow cards and things that went missing that would be red cards if they were seen by Premiership disciplinarians. Concussion, broken ribs – you name it.

“They didn’t like getting beaten but we took some serious injuries. You’ve got to take the rough with the smooth but I think the officials during the game and afterwards haven’t looked at it with scrutiny it deserved.”

Kockott was also sent off and has been given a ban of only week by the French judiciary, who found him culpable of ‘edginess’.