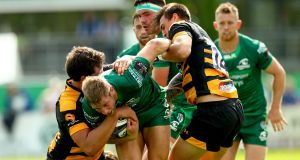 Australian international Kyle Godwin is ready to embrace the challenge of playing rugby in the northern hemisphere and says it was thanks to former coach Kieran Keane that he joined Connacht.

Godwin (26) won his sole Australian cap against France in 2016, but, seeking a fresh challenge, the Zimbabwean-born centre decided to leave Super Rugby franchise Brumbies and set up home in the West of Ireland.

His move was announced in March when Keane was still in charge of Connacht, and it coincided with an upsurge in Godwin’s form, including a stunning solo try in his final game for Brumbies against Aussie rivals Waratahs.

He was handed a first start for the westerners last weekend against Wasps and, in an 80-minute run-out, he was at the heart of much of their positive creative and defensive play.

And while Keane was the instigator in the move, Godwin says he is looking forward to working alongside new coach Andy Friend.

“I got a call from KK one day saying he was interested in me coming up. He said it rains a bit out here but I’ve put that behind me,” said Godwin.

“I liked the way KK wanted to play and I heard Galway was a great town with great people. I thought, ‘Why not take an opportunity to come and join Connacht?’

“I had played eight seasons of Super Rugby so, for me, it was a good change-up to experience northern hemisphere rugby. I think it’s becoming very strong and the Pro14 is a very strong league. I really wanted to come here and challenge myself.

“To be honest, I only met Andy once or twice at a few awards nights back in Australia, but this is the first time I’ve properly worked with him. So far, so good. We’ve got a backgammon challenge coming up so I’ll let you know how that goes!”

I’ve been very impressed with how professional Connacht are

Since he has no international duties to contend with, Connacht fans can expect to see Godwin regularly line up in the centre for the next couple of years. Bundee Aki has only returned to training this week, while Tom Farrell has started pre-season with the same impressive form he showed last season, which has handed Friend plenty of options. Godwin knows where he wants to play, though.

“Brumbies is a great programme. They’re very professional as well, they love to play with the play and with width, so hopefully I can bring a bit of that and we can have a bit of running rugby. We’ll try to entertain the fans and score some tries.

“I’ve been very impressed with how professional Connacht are and, hopefully, that can translate into on-field performances.

“It’s just a learning experience for me, I’ve never played northern hemisphere rugby before. It’s a different game, so I’m trying to soak it all in and learn new tools and skills and become more of a complete player.”