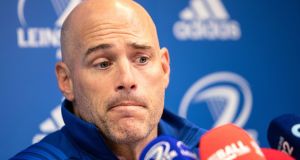 Looking back on his first season with the Crusaders, Ronan O’Gara last week admitted that on joining the high achieving Canterbury-based franchise the thought of them doing anything less than retaining their Super Rugby title might have reflected badly on him.

At face value, the task facing O’Gara’s old foe, Felipe Contepomi, looks every bit as daunting given the Leinster legend has become their new backs coach in the wake of them achieving last season’s historic double.

How to improve on perfection, or at any rate improve upon a perfect season?

Contepomi does not see it that way.

Such is the nature of “a team sport”, he says, “you’re not the magic solution or the only problem. It’s about trying to play your role and add something to this great team that is Leinster. That is the key for us this year, to try to improve and maybe bring in something different.

“But, it has to be something that makes us improve. We don’t have to change everything. We just have to improve and there are many areas where we can improve. I don’t see it, personally, that if Leinster repeat the double, it comes on me.

“I will take it personally if, by the end of the year, I haven’t given anything to any player or I haven’t helped any player to develop. As a coach, you are kind of a server to players to help them develop because the game is for the players, about the players.”

Contepomi stresses that he hopes to help all Leinster’s backs develop, but clearly it will be particularly intriguing for Johnny Sexton and the cabal of young outhalves on their roster to work with Argentina’s all-time record points scorer.

The departure of Joey Carbery and a pre-season wrist injury for Ciaran Frawley would seem to highlight the importance of Ross Byrne’s wellbeing this season, given he started 16 of Leinster’s 23 Pro14 games last season, compared with Sexton’s four.

But, with Byrne’s younger brother Harry, Noel Reid and Tom Daly in mind, Contepomi maintained: “I think we have the outhalves.” Then, with a smile, he added: “First of all we have the best outhalf in the world with us, so that’s a great story. Obviously he won’t be available for selection for the first few games but then we have other good players that can fill those boots.”

Inevitably, Contepomi was pressed on his claim regarding Sexton, not least in light of Beauden Barrett scoring four tries (a record by any outhalf in a Test match and a record for an All Black in a game against the Wallabies) and 30 points (an all-time record in any trans-Tasman test) in New Zealand’s 40-12 win over Australia last Saturday.

“You can pick who you want, but I’d like to see Johnny in a black jersey and see what he can do and then we could compare, you know? I think that Ireland is probably the second best in the world nowadays and a lot of that has to do with how Johnny conducts that team.

It was Contepomi’s injury in the 2009 Heineken Cup semi-final against Munster, his last game for Leinster, which in many ways opened the door for Sexton, and while he never doubted Sexton would make it as an international player, he has even exceeded the Argentinian’s expectations. “And that’s the one thing that younger players have to learn from Johnny, he always tries to improve.”

Ross Byrne is back in training this week, as are the fit again duo of new signing Joe Tomane and Reid, and Contepomi said of Byrne: “You can see that he’s a very good player.

“He’s confident, he talks, he knows the competition and I think he’s a good player to have around because he’s a good footballer. He went on the Irish tour and that puts him in a good position. Personally he’s in a great rugby moment so hopefully he can keep giving Leinster what he has been giving so far.

“I haven’t seen him play that much, yet. But in training he’s very good, He’s one of those outhalves who are intelligent, looks for space, looks for options, always thinking. I don’t like comparisons, Ross Byrne is Ross Byrne and Johnny is Johnny and it’s very difficult to be compared to Johnny. I think he (Byrne) has to make his own way, and he’s doing it in a good way.”

Starting in Cardiff this Friday against the Blues in their opening Guinness Pro14 game of the season, as double champions Leinster will be even more of a prized scalp than ever before, for all opponents.

So be it, according to Contepomi.

“This is the same. We are the champions. We need to assume that responsibility in every game. Wherever we go, everyone will try to beat us, everywhere because we are the European champions and the Pro14 champions.”