Gopperth facing up to nine months out after knee surgery 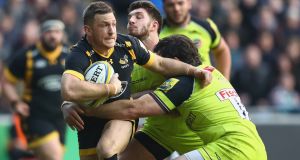 The 35-year-old former Leinster player sustained a serious anterior cruciate ligament injury during the pre-season defeat in Connacht and is expected to be sidelined for up to nine months.

New Zealand-born Gopperth’s setback has left Wasps short of outhalves as Danny Cipriani moved on to Gloucester earlier this summer.

Former All Blacks and Highlanders fly-half Lima Sopoaga has joined the London club for the 2018-19 season, but does not arrive until next week.

Billy Searle (22), who arrived from Bristol in May, started in the No 10 role in Saturday’s friendly win against Ulster.

Wasps director of rugby David Young confirmed the club will also be without prop Jake Cooper-Woolley and hooker TJ Harris for up to two months after their respective bicep muscle injuries required surgery.

Wasps launch their Premiership campaign at Worcester on Saturday.