Ulster and Munster heading to France for important penultimate round fixtures 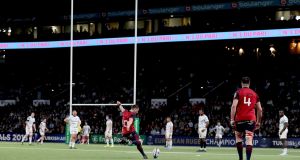 January has become one of the most gripping periods in the rugby calendar – the last of the Christmas interprovincials are decided, the countdown to the Six Nations begins and Champions Cup fates are realised.

Round five of Europe’s primary club competition however may just offer everything you want in a weekend of rugby, and with two Irish teams – Ulster and Munster – heading to France for the penultimate round of the pool stage, rugby fans are presented with a glorious opportunity to enjoy a weekend of rugby galore on the continent.

On Saturday afternoon Ulster travel to one of the most boisterous stadiums in world rugby, Stade Marcel-Michelin, where they’ll play Clermont Auvergne before Munster travel to the state-of-the-art indoor Paris La Défense Arena a day later to play Racing 92.

Both are events to savour so why choose between them when you can do both?

Flying to Paris is the most convenient and comfortable way of making your way to France for a long weekend of rugby. Getting the best value on offer involves flying into Orly Airport from Dublin with Transavia on Friday night before returning on Monday evening with Ryanair from Beauvais.

The Transavia flight leaves Dublin 7.50pm, enabling you to complete a day’s work, if you wish, before heading for the airport. This could prove beneficial since the return flight with Ryanair leaves Beauvais at 10.30pm on Monday night. The entire cost of the journey works out at €108.00. This price can be availed of on www.skyscanner.com

A return trip on the train from Gare du Nord in Paris city centre to Clermont Ferrand will cost you €33.00. A train leaving at 9.00am on Saturday morning takes approximately three-and-a-half hours, leaving you with plenty of time to get to the stadium, a half-hour walk from the city centre, in time for the 2.00pm kick-off. A return journey leaves Clermont at 7.30pm, which gives you the opportunity to sample the post-game atmosphere around the venue. Fares can be bought on www.thetrainline.com or on the official SNCF website.

There are numerous deals and discounts regarding tickets for the Paris Metro and RER system. In summary every journey, no matter what length in takes, costs €1.90 within the confines of the city, though there are deals available when buying in bulk or buying daily and weekend passes. A carnet – a bundle of 10 – of tickets costs €16.90. The fare from Orly Airport will cost a little more as it extends beyond the inner RER region. A bus to the city centre however costs only €8.30.

In order to get to Beauvais on Monday you will need to avail of a shuttle service from Porte Maillot on the outskirts of the city. A journey one-way costs €15.90, if booked in advance. Tickets can be purchased online at www.shop.aeroportparisbeauvais.com.

Tickets for Ulster’s game with Clermont Auvergne have yet to go on sale, though when they are available through the club’s website, www.asm-rugby.com, they are likely to be priced from €14.00 as they have been for other European games.

Meanwhile, tickets can already be purchased for Munster’s game with Racing 92. They can be bought on the stadium’s website, www.parisladefense-arena.com, for as little as €10.00.

For one person flying (return) to Paris from Dublin on Friday, January 10, returning on Monday, January 13, with travel to and from airports, a carnet of rail tickets, a return rail ticket to Clermont-Ferrand and match tickets: €206.