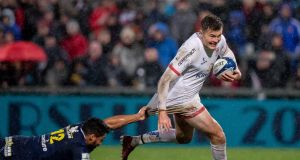 Ulster will miss the suspended Will Addison, who had the most carries by any back this season. But, in replacing him with Jacob Stockdale, the home side are not without go-forward power when they face Harlequins in Belfast.

More ball in space than he receives on the left wing would please Stockdale and in that scenario Ulster could be ripe for making this their third win in Pool Three from three outings.

Coach Dan McFarland has remained faithful to the side that beat Clermont two weeks ago with just Craig Gilroy coming in. McFarland will fully understand the challenges all around the park for Ulster, who unfailingly get a rush from playing at Ravenhill.

Kyle Sinckler, his first game back since leaving the field at the start of the World Cup final, and Joe Marler in Harlequin’s frontrow will make the scrum a competitive area for Eric O’Sullivan, Rob Herring and Marty Moore, all of them seeking Andy Farrell’s attention.

Tevita Cavubati and Semi Kunatani are also brought into Harlequins’ pack, while their backline remains unchanged. The Premiership side are hoping to build from their win against Bath in the last round.

But if head to heads matter scrumhalves Danny Care and John Cooney might be the pick of the day. Neither of them is ever dull in a match, and the in-form Cooney is hoping to add his fourth try in four games and is not afraid to show Farrell the aspects of his game that Joe Schmidt could not see.

“Not to even get a game was disappointing,” said Cooney this week of World Cup matters. “At the end of the day if I sit at home feeling sorry for myself it is not going to get me anywhere and I knew it’s how I respond.

“I read a lot of books and one was The Obstacle is the Way and it talked about how you respond to things that happen to you. At the end of the day it’s your life and if you react in a way that doesn’t help you it’s an important ethos on the way to live.”

The sides have faced each other on five previous occasions, with the Irish province winning the last three meetings. Ulster have also won each of their last six Champions Cup matches, with five of them coming by five points or fewer. This could be another one score game.

Harlequins’ mindset is that they are long overdue an upswing of momentum in their European runs and come into the match aiming to win back-to-back in this competition for the first time since 2014.

One word of caution on Ulster discipline. The English side have yet to miss a kick at goal this season.