Leinster have qualified after four rounds, turning a potential pool of sharks into a romp 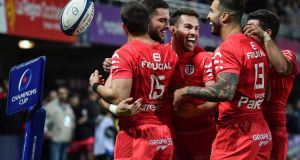 Toulouse have such a stranglehold on Pool 5 that realistically, they too are merely jostling for ranking positions. Photograph: Pascal Guyot/AFP

Whisper it quietly, but have the opening four rounds of the Heineken Champions Cup been a little, well, if not dull then prosaic? The make-up of the quarter-final stages has rarely seemed so predictably packed with the usual suspects.

Four teams have won four out of four, with Leinster the first side in the tournament’s history to qualify for the knock-out stages after just four rounds, while Exeter only need another point in Pool 2 to follow suit.

Furthermore, Toulouse have such a stranglehold on Pool 5 that realistically, they too are merely jostling for ranking positions and with that home advantage in the quarter-finals and, potentially, the semi-finals.

The other team with four wins, Ulster, meet Clermont in a crunch Pool 3 decider in the Stade Marcel Michelin in round five, with each having the insurance cover of concluding games against Harlequins and Bath. So those five either are, or look, absolute dead certs for the last eight already.

It says something about Pool 4 that the unbeaten leaders, Racing 92, could still conceivably miss out on the quarter-finals altogether were they to lose at home to Munster and away to Saracens.

Racing are still best placed, and a win over Munster at la Defense Arena would ensure them of qualification, with Saracens or, at a push, likely to advance as well.

That is likely to leave the last quarter-final place to one of Northampton, Glasgow or, potentially, Connacht or Gloucester.

As for the rest – Lyon, Benetton, Sale, La Rochelle, Harlequins, Bath, the Ospreys and Montpellier – their goose already looks well and truly cooked before Christmas.

In contrast, at the same juncture last season, there were only three sides with four wins out of four, and of those Toulouse still had Leinster on their heels and had to face them in a rematch at the RDS. Sure enough Leinster beat, and overtook, Toulouse en route to beating them again in the semi-finals at the Aviva.

In all of this, of course, as someone once said, winning is boring. And he or she had a point, albeit that only applies to opposition supporters. Certainly Leinster fans can only be enjoying the serene progress of the largely home-grown men, and young tyros, in blue.

In the midst of their four wins was that big sleeves-rolled-up effort in the cloying Lyon mud. But, helped by ideal surfaces the past two weeks, it has been a joy to watch Leinster’s infusion of yet more stars in the making (most obviously Caelan Doris), their array of strike moves, their brand of ball-in-hand rugby, with its tempo, skill set and ambition, and the amalgam of footwork, speed and power provided by Jordan Larmour and James Lowe.

In a group containing the leaders of the Pro14, the Top 14, and the Premiership, Leinster have made a potential pool of sharks into a romp, scoring 14 tries and 93 points in back-to-back meetings with the Premiership leaders.

Nor did Northampton throw in the towel, or pick a team of greenhorns, as they did when losing 60-13 in near identical circumstances at the Aviva Stadium three Decembers ago. The uber-competitive Dan Biggar would never permit it.

That said, in these Little Englander times, the weekend selections by Sale, Harlequins, Bath, Gloucester and, to a much, much lesser degree even Saracens for understandable reasons given their relegation fight, highlights the way so many across the water believe in the primacy of the Gallagher Premiership over the European Cup. Not that Saracens and Exeter, in particular, don’t cherish that European Cup trophy as much as anyone else.

Heretofore it’s often been labeled at the French that they take a dilettante attitude to Europe, especially when out of contention. Yes, true to form, Toulouse, Racing and Clermont remain the usual contenders again and desire that European title every bit as much as the bouclier de brennus.

Even so, unlike some of their English counterparts, La Rochelle stayed honest despite losing their first three games with a gutsy 12-7 win in Glasgow which clearly meant plenty to them. Lyon looked utterly disgusted with themselves at the full-time whistle against Benetton, who were due a victory to end their 15-match, five-year, winless sequence in this competition. And Montpellier’s selection and array of tries were not those of a team who rolled over and had their bellies tickled at home to Toulouse.

All the while, the Racing-Munster-Saracens scrap has been the most compelling, and on Saturday in Allianz Park, even had a good old fashioned scrap. However, in classically po-faced fashion, rugby has reacted indignantly to whatever words Dr Jamie Kearns aimed at Jamie George in the pitchside verbal crossfire, and lamented the shame on the game resulting from those unseemly scenes.

“Horrible abuse” it was claimed in some of the UK media and on BT Sport, following “derogatory” comments by Dr Kearns, as others suggested. Okay, it wasn’t very clever. Backroom staff shouldn’t be getting involved verbally with opposition players. But stuff happens.

Before Saracens and some of the UK media acquire an acute case of vertigo from atop the High Moral Ground, it’s worth noting Dr Kearns admitted his mistake and has apologised.

It can be fairly safe to assume that far more derogatory comments have been made on the sides of pitches, never mind on them, in the history of rugby union. What’s more, not only are all-in 30-man brawls (which is an excessive description for this one given not one proper punch was thrown) part of rugby’s history, but Dr Kearns cannot be held entirely responsible for the actions of the 30 players in the 50th minute.

After all, 29 of them didn’t even hear what he said, but were up for a scrap anyway.