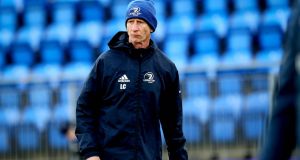 Leo Cullen: “It was a tough period to get through,” said the 41-year-old. “It’s not something I’ll ever forget.” Photograph: Ryan Byrne/Inpho

Leo Cullen laughs out loud as the darkest moment of a still fledgling coaching career gets reflected in a positive light.

Four awfully long years ago Scott Fardy was dusting himself down from a World Cup final defeat to New Zealand. Richie McCaw’s last game. A battle of the breakdown to beat all battles over the ball with Fardy in the thick of the skirmishes.

It was all happening too soon.

“It was a tough period to get through,” said the 41-year-old. “It’s not something I’ll ever forget.”

On Friday lunchtime Cullen was back in the Aviva Stadium sitting exactly where he faced his worst inquisition as Leinster coach.

“Toulon, it’s playing by slightly different rules,” he had said in December 2015 after a deeply frustrating 20-16 home defeat. “We need to have a good look at how we take on a team like that.”

Different financial rules? “Well, they are allowed to sign 16 foreigners.

“The rules that we have are about bringing young guys through,” Cullen tried to explain when nobody was listening. “Creating a pathway for a young player that wants to play for Leinster, to play for Ireland. It’s different. They sign overseas players who have incredible experience.

“When you add that to the mix, it is very tough to play against it. I’m not sure what way it is going to go but it is getting more and more difficult.”

The words were used against him at the time but they get twisted in his favour now. And that’s why he laughs out loud, at the fickleness of it all.

Somebody on the inside presumably told Cullen to start thinking long term. Everybody in the IRFU needed this natural leader to succeed as another inadequately supported indigenous coach would reflect more on them.

Still, four cold winters ago the good times were all but consigned to history. Matt O’Connor had been guillotined the previous summer having clashed against two many pillars of power inside the IRFU – namely Joe Schmidt and David Nucifora – in an entertaining media war of words. Knee jerk was not the Leinster way and with no experienced coaches on the market that August, Cullen’s future role was accelerated.

His and Leinster’s revival has and continues to be nothing short of phenomenal. If the Saracens investment plan for players – essentially financial doping – had been punished a few seasons ago, Leinster would be chasing three European titles in a row. Two from three seems very realistic right about now.

In December 2015 it looked impossible. Toulon, it seemed, would become the norm as the next wave of Leinster schools stars would struggle to compete with such awesome physicality. Being “comfortable in chaos” was something written about in American sports manuals as Stuart Lancaster was plunged into the coaching version of hell before the Englishman and Cullen discovered redemption in each other.

Only a handful of players survive from that miserable Christmas defeat to the defending champions. The crowd partied regardless. Josh van der Flier has returned from Japan a superior specimen and the Kearney brothers are still fronting up but Johnny Sexton is injured while several others have retired or tog for Ulster and Munster with Ben Te’o, unsurprisingly, wandering his way down to Toulon for one last pay day.

Leinster were never going to be allowed follow the money trail.

“It was a lot rockier sitting here,” Cullen remembers. “There was so much change going on at that time. We were a very green group, it is fair to say, a very inexperienced group doing the jobs. Lots of good people with great intent but definitely inexperienced in terms of miles on the clock.

“I was just trying to get through it. There was lots of great intent in some of those games but the landscape was quite different then, if you remember, with Toulon being the team that they were at that stage. We lost a game down there when we had lots of good chances.

“They come up here and we were 11 points up during the game but we gave away a penalty try by Wayne Barnes at scrum time. I can still picture [Georgian prop Levan] Chilachava going across the scrum and thinking that it should be a penalty against them but we get marched under our own posts.

“We were on the back foot in a lot of things but ultimately we weren’t good enough. There were other teams in Europe that were better than us and we were desperately trying to figure out ways how we could improve; adding to the group [he nods to Fardy] in terms of some players and grow some of the younger players was going to be important as that was the main tool for recruitment.

“How do we push guys through, how do we get good coaching into them with various outside experienced coaches, with some people coming in on short term stints [he nods to Graham Henry], we were just trying to learn how to get better.”

Fardy arrived in the summer of 2017 and everything clicked. It is not a return to the dominant seasons under Michael Cheika and Schmidt, rather something different has been created. Something that appears more sustainable as proved by the squad actually improving despite Nucifora’s policy of shifting fringe Ireland internationals, raised in Leinster, to other provinces.

“I saw a group of guys that were hungry to learn,” said Fardy.

“They still are today. The ability to take in information in this group is crazy. I remember sitting in meetings going, jeez, this is long compared to what I was used to in Australia. We would only meet for about 10 minutes in Australia as guys would lose their concentration, me especially. I probably got better at that. It’s the ability to take in information week in week out and then produce it on the field.”

We have learned some really harsh lessons

Make of that perspective what you will, but James Lowe – speaking to Isa Nacewa on New Zealand television this week – seemed to echo a similar sentiment when discussing the mix of “boys all from the same background, nice private school boys, and they are all very smart” and “some country boys, like Sam Cane, they are good for a couple of pints” that have built the current culture.

“We have never been out of the competition this early,” said Cullen way back in 2015. “When that happens you soul search and that’s what we will do. We have learned some really harsh lessons.”

Lessons that Cullen has methodically turned into solutions.

Andrew Porter ready to lay down a marker at Thomond Park 06:00
Joanne O'Riordan: Why I want to live a bit more like Ted Lasso 06:00
Garry Ringrose and Béibhinn Parsons honoured by Rugby Writers 06:00
Aisling McCarthy looking to develop on and off the pitch in Perth 06:00
Rugby Stats: Ruddock and Coombes tick all the boxes for Ireland squad inclusion 06:00
Crossword Get access to over 6,000 interactive crosswords