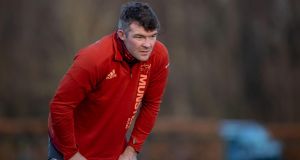 Connacht are on the hunt for famous back-to-back victories when they take on Munster in Galway on Saturday night.

Andy Friend’s side ended Leinster’s 26-match winning run last weekend, as they delivered a stirring performance to run out 35-24 winners at the RDS.

That victory has moved Connacht to second place in Pro14 Conference B - eight points behind leaders Munster, who fell to their first defeat of the campaign away to Ulster last Saturday.

A second interprovincial win in a week would represent a huge statement by the men from the West, and Friend has made four changes to his starting XV for the clash at the Sportsground.

Former Australian Sevens star Ben O’Donnell made his Connacht debut off the bench against Leinster, and he lines out on the wing with fullback John Porch and Alex Wootton making up the back three.

Sammy Arnold and Tom Daly resume in midfield, with Jack Carty - man of the match last time out - and Caolin Blade in the halfbacks.

Up front Ireland’s Finlay Bealham returns at prop alongside Denis Buckley and hooker Shane Delahunt. Ultan Dillane is also back in the starting XV and joins Quinn Roux in the engineroom.

Sean O’Brien has recovered from injury after six weeks out and starts in the backrow with Conor Oliver and Sean Masterson.

As for the visitors, they were depleted when going down 15-10 in a frozen Belfast last weekend but Johann van Graan has recalled a number of frontline players for the trip to Galway.

James Cronin is set to make his 100th Pro14 appearance at prop, and is joined by Kevin O’Byrne and Stephen Archer in the frontrow.

Hosts Connacht have also confirmed all players and staff have returned negative results in the latest round of coronavirus tests.

Head coach Friend said: “Last week’s win was a testament to the belief and determination that was still present in our squad despite a challenging few weeks. Now it’s all about backing that up and finding another win that will bring us right into contention for a Pro14 final spot.

“We’ve had a very positive week with no news Covid cases and a few players available to us again, but we will still have to be at our best to overcome a Munster side that is full of quality.”