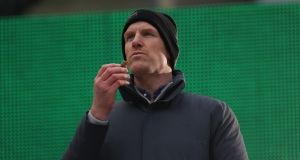 Paul O’Connell: Farrell brought him into the Irish set-up during the pre-lockdown stages of last year’s Six Nations, which clearly can now be viewed as a trial run for this full-time appointment. Photograph: Billy Stickland/Inpho

Only time will tell whether the co-opting of Paul O’Connell onto the Irish coaching ticket will prove an inspired masterstroke, but at face value it certainly looks like a punt worth taking.

True, he doesn’t have the most extensive coaching CV to augment his stellar playing career, but it’s not as if one of his areas of expertise, namely the lineout, isn’t in need of a coaching reboot, and he’ll add more besides. Nor does this make the Irish coaching ticket especially overcrowded.

The doubters will point to O’Connell only lasting one season of a three-year deal with Stade Francais in the Top 14 after working with the Munster academy and then assisting Noel McNamara with the Irish Under-20s, a stint which looks particularly useful now.

O’Connell admitted himself that it was disappointing not to see out his three years at the Parisian club, which not only would have given him more experience but would have also more clearly informed him as to whether he was suited to a coaching career.

But the Top 14 is a volatile place for coaches, not least those coming from outside France. Even Michael Cheika only lasted two seasons at Stade Francais before going on to transform New South Wales and then taking the Wallabies to the World Cup final after being victim of a very French coup which also prompted Mario Ledesma to leave the Parisian club.

Word was that O’Connell poured plenty of energy and assiduous detail into his role at Stade during the week but felt undermined when his work was overhauled come the weekend.

To honestly wonder aloud whether he was indeed cut out for this coaching gig is no bad thing, for he has always been a candid speaker. That was demonstrated in his ensuing role as a TV pundit for the BBC in the Six Nations and for ITV at the World Cup, and it seemed as if that would be his main involvement in the game.

Significantly though, Andy Farrell brought him into the Irish set-up during the pre-lockdown stages of last year’s Six Nations, which clearly can now be viewed as a trial run for this full-time appointment. O’Connell himself, the other coaches and the team leaders are presumably all on board with this development.

As a player who captained Munster, Ireland 31 times and the Lions on the 2005 tour to South Africa, he was a particularly keen student of the lineout, and of late the Irish lineout, such a go-to cornerstone of their game like most teams, has malfunctioned under pressure, especially in the attacking zones.

O’Connell also played under a host of successful coaches, and his coach/captain relationship with Joe Schmidt blossomed as he became a disciple of the latter’s ways. O’Connell will also demand high standards, and will bring a strong voice as well as what Ronan O’Gara once called “a look from those eyes”.

Simon Easterby has been six years overseeing the Irish lineout as forwards coach before combining this role with his duties as defence coach, no doubt in tandem with Farrell given his track record in that department.

A shift in responsibility will allow Easterby to solely concentrate on defence, which is the area he began his coaching career in with the Scarlets in 2012. Separate full-time assistant coaches for forward play and defence is is also in keeping with all other international coaching tickets.

With Mike Catt in charge of the attack, Richie Murphy in skills and John Fogarty the scrum, Farrell now has five assistants, which is the same as Eddie Jones and one less than Fabien Galthié has assembled on the French coaching ticket.

The presence of an Irish playing legend from Munster also looks a shrewd move by Farrell in both freshening up and providing additional balance to the coaching staff, and appeasing at least some supporters.

Always a very driven man, O’Connell wouldn’t have taken on this job if he didn’t believe he was capable of making a positive contribution, and one thing is for sure, in the same way that he did when pulling on any jersey he played for, he will give everything to the job.

France will travel to Dublin to play Ireland after being granted exemption 14:35
Once pain of defeat eases Frampton will be glad it is all over 14:03
Leinster submit detailed plans to Government for safe return of spectators 13:15
‘I shredded everyone’s nerves, I’ll try to win more emphatically next time’ 11:08
Nick McCarthy to re-join Leinster from Munster 10:38
Crossword Get access to over 6,000 interactive crosswords