Magnitude of win over Leinster not lost on Connacht 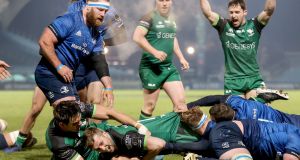 The nature and context of the victory would have provided enough justification to celebrate raucously at the final whistle, a first victory in Dublin since September 2002, and also ending Leinster’s 26-match unbeaten record in the Guinness Pro14 for good measure, but instead Connacht sought the sanctity of dressing room to vent the obvious elation.

The cheering carried across to the far stand on a bitterly cold night at the RDS, the outpouring of joy in marked contrast to the end of match scenes. Connacht captain Quinn Roux gathered his players in a huddle for a quick debrief before embracing the end of match formalities.

Head coach Andy Friend was asked about the low key on-pitch reaction. He said: “It’s important to be humble when you win too. We’re here at the home of potentially the greatest team in Europe and we’ve just knocked them off, so you don’t want to be in their face with it either.

“Being respectful is part of rugby, when the door got locked there was a lot of excitement and jumping around but I didn’t think anyone was disrespectful post the win.”

The merit of Connacht’s stunning triumph brooks no argument, a victory underpinned by great energy, a ferocious commitment and determination on both sides of the ball, a superior kicking game and crucial turnovers at the breakdown.

They hassled and harried Leinster to distraction, applying an intense pressure that suffocated the home side’s attacking brio, leaving them befuddled and beset by errors. Connacht forced two intercept tries and won many of the personal duels.

It seems invidious to single out individuals because it was a superb team display but Jack Carty produced a nuanced all-round performance that supplemented his 25-point haul, equalling the highest number of points scored against Leinster by an individual in the professional era. The previous mark was held by Ulster’s Scottish outhalf, Stuart Laing back in a 1997 interprovincial at Donnybrook.

Carty demonstrated a predator’s instincts for his brace of tries while his kicking, from the tee and out of hand, caused the hosts considerable discomfort. Connacht’s general kicking game was far more accomplished and accurate than their opponents.

Tom Daly had a superb game in midfield, ably assisted by Sammy Arnold, Caolin Blade was sharp, Roux (20 tackles) and Gavin Thornbury outstanding in all facets of the game while Conor Oliver and the Mastersons, Eoghan and Seán, won the battle of the breakdown. If these were headlines acts then the supporting cast deserve huge kudos too.

The visitors brought a physical intent and intensity from the opening whistle, an energy that was in marked contrast to the hosts. Leinster head coach Leo Cullen said: “I totally agree, that’s the way it looked to me as well.

“We fed that as well. We were a little bit loose, a little bit inaccurate, in terms of our carrying and cleanout in particular. We threw the intercept, we get beaten around the ruck and we’re a little slow to get set.

“They pick and go through the middle of us and then they score off that bust as well; we’re just slow across the board in that first half for whatever reason. It’s a bit disjointed this time of year but, still, there shouldn’t be any excuse from us.

“We knew the challenge. It’s not like we haven’t seen it before against Connacht. We got beaten 47-10 at the Sportsground not that long ago so there’s been a lot of changes in personnel since then and, yeah, it’s a big lesson hopefully for us.”

Losing Johnny Sexton after 23 minutes, at which point Leinster trailed 12-0 to Carty’s brace of tries, required a reshuffle in a backline containing debutants Andrew Smith and Max O’Reilly - Greg McGrath also made a first appearance from the bench - neither of whom were given a decent pass or a scintilla of space. Jimmy O’Brien switched to outhalf before being injured while David Hawkshaw finished the game there.

A principal difference between the teams was that Connacht’s collective cohesion superseded cameos from a handful of Leinster players led by Ryan Baird, O’Brien, kicking aside, Peter Dooley, Scott Penny, Dan Leavy, Luke McGrath and replacements Seán Cronin and Hawkshaw; they all did some decent things individually.

Trailing 28-17 Leinster might point to Hawkshaw’s correctly disallowed try for blocking in the build-up as the moment in which a third quarter revival that was gathering pace effectively derailed the comeback. They did show character in eking out a four-try bonus point with Ed Byrne’s late effort.

Connacht’s performance imperfections were largely down to brittle or absentee fringe defence at rucks and a maul that pre-empted tries scored by Penny, McGrath and Baird. Victory will soften the glare.

Carthy intercepted Ross Molony’s pass to race 45 metres for his side’s first try and chose a good line from close range for his second with the excellent Alex Wootton scampering over in the corner for a third try after Daly had forced a turnover with a thumping tackle on Liam Turner. Connacht led 25-5 at the interval.

Leinster rallied to 28-17 with tries from McGrath and Baird but when Daly read Hawkshaw’s intended pass on 72 minutes, he grabbed the ball, possessing enough strength and pace to score under the posts. There would be no last minute heartbreak for Connacht this time.