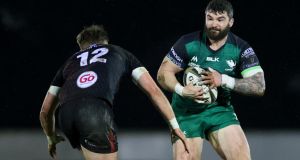 Sammy Arnold of Connacht runs at Ulster’s Stewart Moore during the Guinness Pro 14 game at the Sportsground. Photograph: James Crombie/Inpho

Connacht kept their hopes of reaching the Guinness Pro 14 final vibrantly alive with their historic first win over Leinster at the RDS last Saturday but they are swiftly back in ‘must-win’ territory when hosting Munster at the Sportsground next Saturday (kick-off 7.35pm).

The goalposts having shifted in light of the Rainbow Cup being shoehorned into the end-of-season itinerary, with only the respective Conference winners progressing to the final. Connacht closed the gap behind Munster atop Conference B from 12 to eight points last weekend but, realistically, probably need to trim that lead further given they will each then have only seven matches remaining.

“Yeah it is,” agrees head coach Andy Friend of this game’s must-win tag “and as it currently stands that’s what it looks like, just the top of each table goes through.

“We said at the start of the year we want to win all of our home games and we haven’t been doing that, and we want to win 50 per cent of our away games and we’re doing better than that. So the thing that’s actually keeping us in front at the moment is the away-game wins and we need to get back the winning formula here at the Sportsground and no better time to do that than on Saturday night,” he added.

Indeed, Connacht have two wins from four home games whereas last Saturday marked their third win in four away matches.

Following Munster’s first defeat of the season last Saturday away to Ulster, Friend anticipates Johann van Graan will restore a battalion of internationals and also has no doubt what to expect from Munster.

“Oh, I think what you can always get from Munster. They’re going to be physical. You give them a penalty and they’re going to kick to the corner and maul you or kick three points, that’s how they get their points.

“I thought that was probably the really pleasing thing for me. I just thought the attitude and the energy that we had defensively to get off the line and to protect our line was really, really impressive. So we’ve got to bring that for 80 minutes because you know exactly what’s coming from Munster. They’re a quality outfit and they’ll have a point to prove.”

No one brought more attitude and energy to Connacht’s defence against Leinster than centre Sammy Arnold who, along with Conor Oliver and Alex Wootton, will be mustard keen to play against his former provincial team-mates.

Extolling Arnold’s “attitude” Friend adds: “He is one of the most driven young men you’ll meet and he just wants to win. He wants to be there, he wants to be on the biggest stage and he wants to win, and that came through in the first conversations we had with him.

“I’m also very aware he was an ex-Harlequins junior from the UK and again to come across from there, to go to Ulster and then Munster, you can see he’s hungry for that. He’s chasing an environment where he can thrive. For various reasons he obviously didn’t feel like he was able to thrive where he was and he was looking for a change. When we got talking to him you could sense that hunger and desire to be very, very good and thankfully he chose to come here to Connacht.”

Wootton scored his seventh try in nine starts for Connacht last week and his loan move from Munster does not preclude him from playing on Saturday. Arnold and Oliver have also been playing regularly and describing the trio as “fantastic”, Friend says: “They’ve come in and pretty seamlessly just blended into the culture. That word ‘culture’, that word ‘environment’, that’s the making or breaking of the programme so we work really hard on that.

“We have a good group of men here and a good group of staff here who aren’t afraid to call it how it is. We talk about having the real conversations and they do that but it’s pretty transparent what we’re about.

“I’m not going to say we’re perfect either, we’re not, and we’ve had moments even in this season where we’ve seen standards slipping but what’s good now is that the process rolls pretty quickly and we seem to fix it pretty well. Having those blokes with that experience come in and to fit in seamlessly is a credit to the whole group.”