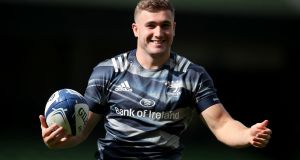 Friday night’s Pro14 clash between Leinster and Ulster sees Dan McFarland’s side travel south with 10 wins from 10 under their belt, as they sit pretty at the top of Conference A.

Defending champions Leinster trail them by 10 points - albeit with two games in hand - and the importance of the fixture has been reflected in Leo Cullen’s team selection.

The hosts will be smarting from last weekend’s defeat to Connacht at the RDS and boast a side made almost exclusively of Ireland internationals, with former Wallaby Scott Fardy the only exception.

Hugo Keenan - one of the few rays of light during Ireland’s Autumn campaign - starts at fullback, with Dave Kearney and the fit-again Jordan Larmour on the wings.

Ross Byrne takes up the rare position of outside centre, with Robbie Henshaw at 12. Johnny Sexton failed a HIA against Connacht but is fit and leads the side from outhalf with Jamison Gibson-Park at nine.

The Leinster pack looks equally formidable, with Cian Healy and Andrew Porter at prop either side of Sean Cronin.

Fardy is joined by James Ryan in the engineroom with Rhys Ruddock, Josh van der Flier and Caelan Doris in the backrow. There’s no place in the matchday squad for Will Connors or Dan Leavy.

For the visitors, McFarland has made five changes from the side which ground out victory against Munster in a frozen Belfast last weekend.

Michael Lowry comes in at fullback in place of the injured Jacob Stockdale, with Matt Faddes and Ethan McIlroy - a try scorer against Munster - on the wings. Stuart McCloskey and James Hume start in a powerful midfield with John Cooney and Billy Burns in the halfbacks.

Up front Andrew Warwick and Marty Moore start at prop with Rob Herring at hooker, with Alan O’Connor and Sam Carter at secondrow. Leinster products Greg Jones and Jordi Murphy are joined by outgoing Springbok Marcell Coetzee in the backrow.